What Easter means for Belfast republicans 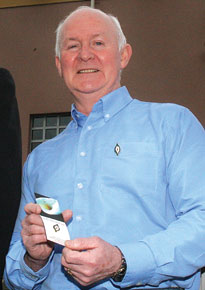 Easter Sunday is the most sacred date in the republican calendar, when Ireland’s patriot dead are remembered with pride across the country and throughout the world.
In advance of this year’s Belfast Easter parade and commemoration, Liam Shannon, the Chairman of the National Graves Association, spoke about the importance of Easter to Irish republicans and the preparations for this year’s parade.
“The Belfast Easter parade has a massive history,’’ said the veteran republican.
“On Easter Sunday 1942, Volunteer Tom Williams and other Volunteers of the Belfast Brigade of Óglaigh na hÉireann, including the late Joe Cahill, set out to create a diversion so that the parade would be able to proceed up the Falls Road unimpeded by the RUC.
“Their action that day ended with the death of an RUC member and Tom Williams was subsequently hanged in Crumlin Road Gaol after being convicted of causing the RUC member’s death.
“We have come a long way and we have achieved so much since 1942 and that is because of the sacrifices of our patriot dead. Every one of them is a hero and we are proud of them.
“The role of the families of our patriot dead in the Easter parade is central.
“On the morning of this year’s parade a National Graves Association event will honour the families of our fallen volunteers and, at the parade itself, the families will have pride of place at the front.
“Participating in the parade will be republicans dressed in the uniforms of past generations of republican soldiers, from those who fought in the 1916 rising, through to those who fought in the 1940s, ‘50s and ‘60s.
“Also, we look forward to the return of the Pikemen from Wexford, who will represent those who fought in the United Irish rebellion of 1798.
“We will have a number of bands from throughout Ireland and from Scotland which will add to the fantastic atmosphere at the parade on Easter Sunday.
“Every year we are enthused by the enormous numbers of young people who take part in the parade and wear the Easter Lily to remember the sacrifices of previous generations. These young people are the future of our struggle and our country.
“In preparation for this year’s event, a mural commemorating the role of the Cumann na mBan has been placed at the former Andersonstown RUC barracks site.
“We have also had an advertisement for the parade painted at the former barracks site, across from Milltown Cemetery and erected banners on the Falls Road to encourage all republicans to wear an Easter lily.
“We want to encourage as many members of the community as possible to come out and take part in the Easter parade and show that we are proud to be an Irish republican and proud of our republican history.’’
This year’s National Graves Association Easter parade takes place on Sunday, 4 April, assembling at Beechmount Avenue at 1pm before leaving at 1.30pm sharp to march to the Republican plot in Milltown Cemetery for the annual Easter commemoration, where Sinn Féin President and West Belfast MP Gerry Adams will be the speaker.
Honour Ireland’s dead and wear an Easter Lily.

Wear your Lily with pride

Sinn Féin MP and deputy First Minister Martin McGuinness on Tuesday joined with the Belfast National Graves Association and the Sinn Féin Assembly Team in launching this year’s Easter Lily campaign.
“Easter is the most important date in the republican calendar, a time when we gather right across Ireland and beyond, to remember and commemorate those men and women, throughout the generations, who gave their lives in pursuit of Irish freedom and independence,” he said.
“It is also a time when we recommit ourselves to the achievement of our republican objectives.
“The Easter Lily symbolises the respect and admiration we hold for our Patriot Dead and I am delighted that committee members from the Belfast National Graves Association have joined us for this launch; their work in maintaining the graves and memorials to our Patriot Dead is vital to ensuring further generations know the history of the republican struggle and are inspired to join with us today in working towards a united and free Ireland.
“I call on people to honour Ireland’s dead this Easter season by wearing their Lily with pride.”