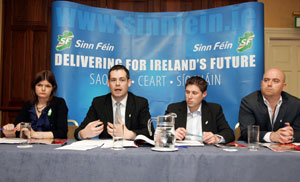 Sinn Féin Senator Pearse Doherty on Friday launched a set of proposals aimed at tackling the problem of youth unemployment.Senator Doherty said, if implemented, Sinn Féin’s proposals would get 50,000 people under the age of 25 off the dole immediately and create many more jobs in the years ahead.
The proposals include a specific youth jobs fund, measures to facilitate self employment and a focus on growth sectors such as digital media, tourism, green jobs and agri-food.
He said: “If action is not taken to tackle Ireland’s soaring youth unemployment this will have huge implications for the economy and for society into the future. But the government has no strategy to keep young people in Ireland and use their skills to rebuild the economy. It has no vision for the future. They are hoping that emigration will hide the true extent of unemployment amongst the young. It is clear that the Government’s decision to cut youth dole payments was done to encourage young people to leave.
“The fact is that there are many measures that the government could be implementing to tackle youth unemployment. Sinn Féin is presenting these solutions and we are determined to campaign for their implementation.
“We cannot sit on our hands and see the best minds of this generation of young people wasted or exported. If we are to rebuild a sustainable and vibrant economy these are the people who will do it. The young unemployed must be given the opportunity to work and to use their skills and education.
“Investing in tackling youth unemployment now will pay dividends well into the future. Sinn Féin advocates taking revenue from the pension reserve fund on a once off basis and implementing the revenue raising proposals set out in our Budget 2010 pre-Budget submission in order to fund our job creation proposals.”

“Our proposals show that it is possible to beat youth unemployment with imaginative thinking and a political commitment,” said Doherty. “This has been completely absent from the government’s approach to the jobs crisis.”