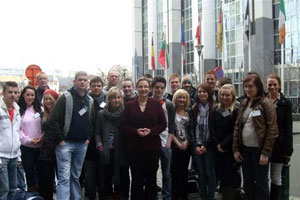 A delegation of Sinn Féin students has just returned from a trip to the European Parliament in Brussels, hosted by the party’s MEP, Bairbre de Brún. The delegation was made up of 27 students active in cumainn organised at the University of Ulster Magee, Coleraine and Jordanstown, Queens University Belfast and St Mary’s University College, Belfast, respectively.
The visit, which included an extensive tour of the European Parliament, focused on Sinn Féin’s engagement with the institutions of the European Union and the need for Left parties to work together to build a social Europe. Niels Jongerius of the Dutch Socialist Party addressed the young activists on how he has helped build effective and imaginative campaigns with his party’s youth section, ROOD, on a range of issues, including the campaign to end the allocation of slum housing to students.
Renato Soeira, a staffer with GUE/NGL, the grouping to which Sinn Féin is affiliated in Europe, provided an update on the rollout of the Bologna Process which, while not an EU initiative, sees the European Commission aiming to make higher level educational qualifications recognisable across borders. The process has been criticised by many for turning universities into businesses or ‘diploma factories’ rather than places of learning.
Soeira pointed out real concerns that students are being treated as customers and that the system, which is overregulated, doesn’t allow for national differences or individual considerations. The emphasis on the attainment of vocational degrees, while not always a bad thing, has meant a reduction in funding in some non-vocational areas and has seen sponsorship by big business of the more ‘employable’ education programmes. He also highlighted the fact that very little debate has taken place regarding its implementation.
An Phoblacht
44 Parnell Sq.
Dublin 1
Ireland