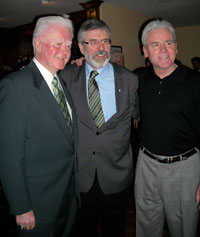 So here we are again. The sun is still shining. The sky is still blue. And the train is just now sliding gently out of Union Station in Washington and beginning its rolling singie-song passage to New York. This blog, your man, Ms O’Hare and other wandering republican evangelists are starting the long journey home.
It has been a good visit. No matter how this blog feels when I start these trips I always feel uplifted at the end. The connection between Ireland and Irish America is electric. And contrary to the image of dewy eyed sentimental Americans with an outdated view of Ireland so often depicted by sections of the media those Irish Americans who I meet are clued into what is happening back home. In fact in these internet times people in the USA can get overnight news from Ireland before people living in Ireland.
So our events in Washington were filled with informed supporters of the Irish Peace Process and a united Ireland. The Friends of Sinn Féin lunch was a huge success, with a very big delegation from the Labour movement. Terry O’Sullivan spoke wonderfully well. Given the devastating effect of the recession on working people here, the support from the trade unions is clear evidence of the connectiveness between the Irish cause and organised labour in the USA. Jimmy Hoffa, Sean McGarvey, Joyce Flynn, Jack Aherne and Chick O’Donahue were among the leaders in attendance. And all the Kellys.
Then the Speakers’ Lunch. And later the White House Reception. The Taoiseach and the US President made good humoured speeches. This blog noted President Obama’s remarks on immigration. He spoke of ... “Fixing our broken immigration system. And that’s why my own commitment to comprehensive immigration reform remains unwavering.”
Sinn Féin supports immigration reform which would provide a visa for the undocumented Irish.
There are many thousands of undocumented Irish living and working in the USA who have built new lives and are contributing positively to that society. This blog meets many people who are in this position. In Boston at the weekend some raised concerns about the length of time spent in prison by Irish citizens who are detained for an overstay of their visa and who have no criminal convictions. This is a huge trauma for these detainees and for their families. It is also a waste of US taxpayers’ money. In this blog’s opinion those detained should be allowed to return home as quickly as possible after they are arrested.
In meetings over the last few days this blog put these points to the representatives on Capitol Hill. It is an issue which we will return to again and again. For now time for some shut eye. Your man is already snoring gently. We have many hours of continuous travel before us. A kind of republican movement. I will leave you with a quote from George Washington which President Obama used to close his remarks at the White House last night.
“When our friendless standards were first unfurled, who were the strangers who first mustered around our staff? And when it reeled in the light, who more brilliantly sustained it than Erin’s generous sons? Ireland, thou friend of my country, in my country’s most friendless days, much injured, much enduring land, accept this poor tribute from one who esteems thy worth, and mourns thy desolation. May the God of heaven, in His justice and mercy, grant thee more prosperous fortunes, and in His own time cause the sun of freedom to shed its benign radiance on the Emerald Isle.”
And so say all of us. Slán......And well done to Saint Galls. A worthy victory.

A striking new portrait of human rights lawyer Pat Finucane was unveiled on Capitol Hill, Washington D.C., last Thursday as part of the events to mark St Patrick’s Day in the U.S. capital.
Congressman Richard Neal, Chair of the Friends of Ireland grouping in the U.S. Congress performed the unveiling of the portrait in the U.S. Capitol Building.
He said: “For more than 20 years, I have worked with my colleagues in the United States House of Representatives to campaign for the truth into the murder of human rights lawyer Pat Finucane.  In 2006, on a bipartisan basis, we passed a resolution calling on the British government to hold an independent public inquiry into the circumstances surrounding his death. As our search for justice and accountability continues, I am honoured to take part in this unveiling ceremony in the United States Capitol Building with Geraldine Finucane and the renowned artist Robert Ballagh.
“This extraordinary portrait, seen here for the first time, will help keep Pat’s spirit and legacy alive for years to come.”

campaign
The work of leading Irish artist Robert Ballagh, the portrait depicts Pat Finucane against a shattered canvas.  Robert Ballagh and Pat Finucane’s widow Geraldine Finucane, who is continuing her campaign for an independent inquiry into the 1989 murder, attended the unveiling.  The portrait was commissioned by the Belfast Media Group, which publishes the Irish Echo newspaper in the United States.

Martin McGuinness is pictured with Maureen O’Rooney, Tim Eagan and Vincent Casey in Chicago on Sunday 14 March at a St Patrick’s Day Breakfast hosted by the Friends of Sinn Féin

A delegation of senior Sinn Féin figures travelled to London last week to join a range of events to mark St Patrick’s Day.
Sinn Féin Minister and MP Conor Murphy was in Westminster on 17 March, where he joined a cross-party reception, hosted by Labour peer Alf Dubs, to mark St Patrick’s Day. Organised by Champ, a broad pro-peace process grouping, the event was addressed by British Prime Minister Gordon Brown, who praised the recent successful negotiation of the devolution of policing and justice and the contribution of the Irish community in Britain.
Conor Murphy also accompanied a delegation of relatives of those murdered on Bloody Sunday to Downing Street. The relatives were in London to hand in letters including to the Prime Minster and the Ministry of Defence. The Sinn Féin MP reiterated Sinn Féin’s support for the families, who had raised concerns that the Saville Report, due to be delivered to the Secretary of State on the week of 22 March, may not be given to the relatives for at least two weeks, and over the nature in which it was to be released.
Earlier in the week, on Sunday, Sinn Féin Mayor of Navan, Councillor Joe Reilly, joined tens of thousands on the London St Patrick’s Parade and marched with the Meath Association, and later alongside the Irish Ambassador to London Bobby McDonagh, London government representatives, the Council of Irish Counties Associations and a representative of the Irish government.
Mayor Reilly said the London festival was an important event, and underlined his view of the vital contribution of the Irish in London, including in contributing to the Peace Process and the political developments in Ireland. The recent conference on Irish unity in London, had reflected this in a particularly lively discussion on the role and rise of the Irish in Britain, and involving many different sections of the community.
In terms of the London Parade, concern had been expressed that, since Boris Johnson took office as Mayor, the budget for the St Patrick’s Day events has been seriously cut. City Hall will spend £100,000 on the parade and festival this year, compared with £150,000 in 2008. He has also scrapped the St Patrick’s Day dinner, which drew in wide support from Irish business and others.
The festival has become one of the city’s largest cultural events, after it was given official backing by previous mayor Ken Livingstone, a move which was met with an immense response from the Irish population in London – reflecting among other things the positive situation underpinned by the Peace Process.
Boris Johnson did not attend this year’s parade, and instead the conservative deputy mayor was present. Whilst Ken Livingstone, who attended every parade as mayor, had invited all of the political parties from Ireland to attend the parade, resulting in a high profile representation in previous years, currently the parties are not invited.
Sinn Féin has stressed the importance of supporting the parade and acknowledging the position and contribution of London’s Irish community, and continues to attend every year.
The parade continues to attract many people, not just the Irish community, but also others from London’s diverse communities. It has become a big day in the cultural calendar, encompassing the whole of London, with the potential to attract tourism, business opportunities and so on. Many have argued it makes greater sense to continue the ongoing political commitment and funding from the London administration which Ken Livingstone began, rather than cut this.
Elsewhere, in response, a group of London Irish business people have independently reinstated the St Patrick’s Day dinner. The ball, held this year at the Grosvenor Hotel, sold out very rapidly, was a very big success, and was attended by former mayor Ken Livingstone.
Later in the week, on 18 March, Sinn Féin deputy leader Mary Lou McDonald travelled from Dublin to London to attend the packed annual national day event at the Irish Embassy. McDonald also held meetings with MPs in Westminster to discuss a number of issues, including the response to the economic crisis affecting both Britain and Ireland, and the need to protect jobs and services and promote an alternative set of economic priorities, including investment, rather than cuts.
Taking place a few weeks after the Irish unity debate conference, which Sinn Féin hosted at the TUC in February, the week’s events saw some themes recurring – notably how the voice of the Irish diaspora can be best represented and heard in relation to the political developments. In the run up to the British general election, this issue is likely to come more to the fore. The impact of the economic crisis in Britain and Ireland, and the ongoing debate about how the next government will take forward its responsibility in terms of the Peace Process and Britain’s relationship with Ireland, are also likely to rise up the political agenda.