Bloody Sunday and the propaganda war 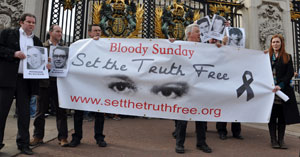 Relatives of the Bloody Sunday victims protesting in London

One of the questions those seeking the truth about Bloody Sunday will hope that the long awaited Saville Report will address, is the role of misinformation and propaganda, not only in the subsequent attempts to cover up what happened in Derry on that day, but also in creating the kind of mindset that prompted the ensuing atrocity perpetuated by British paratroopers.
In briefing the British army’s top brass prior to the deployment of paratroopers, MI5 heightened fears about the level of hostility likely to be faced by British soldiers on the streets of Derry. As a consequence, many of those taking part in the march had already been demonised as “hooligans” and “yobos” in need of being ‘taught a lesson’. There might have not been a ‘dodgy document’, but MI5 had been more than willing to ‘sex-up’ the level of threat, including exaggerating the likelihood of armed action by the IRA.
In the immediate aftermath, the British army told lies and fabricated ‘evidence’ in an attempt to cover up the fact that soldiers had opened fire and killed and wounded unarmed civilians exercising their democratic right to peaceful protest. The most notorious such attempt was the planting of nail bombs in the pockets of one of those killed, Gerard Donaghy, by British soldiers manning an army checkpoint.
Photographs of the dead teenager were circulated amongst the media as ‘evidence’ that those killed had been ‘targeted’ because they were actively engaged in republican violence. Other claims, such as that four of those killed were ‘wanted’ and on the British army’s list of suspects, were also later discredited but other myths have been more persistent.
The notion that the paratroopers were ‘returning fire’ and the implication of civilian casualties as the inevitable, if unfortunate, consequences of a gun battle between the British army and IRA, although just as spurious, have remained part of the mainstream ideological construct.

COMPARABLE MASSACRES
In Britain the last time an event commensurable to Bloody Sunday had taken place was over 150 years earlier. In 1819 a cavalry regiment, with sabres drawn, was sent in to break up a mass rally of the disenfranchised populace demanding parliamentary reform.
But, fortunately for the British government of 1972, the parallel between the role of the Parachute Regiment in Derry on Bloody Sunday and actions of the military in Manchester during the Peterloo Massacre was never drawn. Neither were attacks on black civil rights marches in the southern states of America, or even the Sharpeville Massacre in Apartheid South Africa in 1960 identified as similar events.
Had those parallels been drawn, more people might have questioned the claim that the actions of the British army on Bloody Sunday were underpinned by a desire to defeat the IRA. And more questions might have been asked about a government prepared to use military violence to suppress a popular movement demanding progressive democratic change.
Although in the past the killing of Irish civilians by British colonial forces had often been shamefully unremarkable, Bloody Sunday took place at a time when the British were claiming the north of Ireland as just another part of ‘mainland’ Britain. Of course, that in itself was propaganda, but maintaining such an assertion put the British state in some difficulty.
In the aftermath of Bloody Sunday, Britain would have to be seen to respond in the guise of a western democracy rather than a colonial power. It might all be fiction but it was a fiction Britain couldn’t afford to be dispelled. The establishment of the Widgery Tribunal was as much about that as it was about anything.

HEATH & WIDGERY
The Widgery Tribunal was set up within days of Bloody Sunday and it reported its findings just three months later. Before opening the tribunal, presiding Judge Widgery was advised by the then British Prime Minister Edward Heath that “it had to be remembered that we were fighting not just a military war but also a propaganda war”.
According to a recently broadcast BBC radio documentary, Heath was particularly supportive of propaganda as a means of discrediting opposition to British rule in Ireland. In a letter by his principle private secretary to the Home Office, the British Prime Minister’s sentiments on the matter were made clear.
The PM would like to “see the place flooded” with “those who are experienced in psychological warfare”. The Home Office was advised to “give them their head”.

PSYOPS UNIT
A new unit was established within the British army. The Information Policy Unit (IPU) was based at the army’s Lisburn headquarters in the north of Ireland and tasked with conducting psychological operations and disseminating anti-republican propaganda.
The IPU’s covert role was later exposed by a disgruntled former officer, Colin Wallace and remembered for its many foolish antics, such as setting up fake black magic altars to back a claim that the IRA had turned to devil worship. But to focus on such nonsense is to underestimate the British army’s and other state agencies’ ability to manipulate the media and in doing so frame the understanding of an event to suit British policy.
And the IPU was not alone; another covert propaganda unit working within the British Foreign Office was also deployed. The Information Research Department had been formed in 1948 and tasked with the far more overtly political role of countering communism. This department was later assimilated into the workings of MI5 and MI6.
Although it wasn’t long before Widgery was exposed as a whitewash, some of the fundamental suppositions laid down by the tribunal have yet to be fully discredited. The collapse of Widgery’s credibility dispelled the myth that any of those killed were anything other than unarmed civilians but the idea that Bloody Sunday was only about the British army and the IRA persisted and continues to persist.
Rendering something you want to hide ‘unthinkable’ is the zenith of ideological dominance. In comparison it makes the dissemination of misinformation or propaganda look like a children’s party trick. And it’s here that Britain’s psychological operations have been at their most dangerous.
The notion that frontline assault troops were deployed as a strategic response to the mass mobilisation of a civilian population demanding basic human rights remains so ‘unthinkable’ it is doubtful if the soon to be published Saville Inquiry will have even considered, let alone investigated, this possibility.
Established in 1998 by the then British Prime Minister, Tony Blair, during the course of the inquiry the Saville team have received around 3,500 statements, considered 160 volumes of evidence, listened to 121 audio tapes and watched 110 video tapes. The report is believed to run to 4,500 pages with its stacked volumes reaching over six feet tall.
The report was scheduled to be handed over to the British Secretary of State, Shaun Woodward, last week but fears that he intended to allow MI5, the masters of deceit and cover up, to scrutinise and ‘correct’ the report prior to publication prompted protests by relatives of the victims.

FAMILIES IN LONDON
The families of those killed mounted a series of pickets in London, including outside 10 Downing Street. The Bloody Sunday Trust pointed out the travesty of, not only allowing MI5 access to the report before publication, but also granting them unbridled licence to edit the report in the interests of national security. Following representations from the families, it was agreed that any final ‘corrections’ would be done by government lawyers under the supervision of the Saville team and conducted at the inquiry’s premises.
Addressing a briefing meeting in West Belfast, chair of the Bloody Sunday Trust, Eamon McCann, said the publication of the Saville Report had the potential to dispel a huge shadow that had hung over the Bogside for decades and lift a burden from the shoulders of the families of those killed by British paratroopers but it could also prove to be explosive in terms of the British state and state forces.
The British government has already announced that the publication of the Saville Report may be put on hold pending the forthcoming British general election.

The Troops Out Movement (TOM) spent last Saturday afternoon petitioning in support of the Bloody Sunday Relatives. The Set the Truth Free petition calls for the Saville Inquiry Report to be released to the relatives and wounded at the same time that it is given to the British government and army.
In Birmingham, TOM joined Cahil McElhinney, whose brother, Kevin, was killed by the British soldiers on 30 January 1972. The stall in front of the Council House, festooned with banners and tricolours, drew a lot of attention and was well received. There was a great deal of interest from many young people who would not have been born on the day of the atrocity.
Many were interested in Irish history and doing college and university courses. The day of action on Saturday was followed on Monday by a double-page feature article in the Birmingham Mail newspaper, which has a very wide circulation.
The previous week the Troops Out Movement had given out thousands of leaflets on the issue at the St Patrick’s Parade, so few people in Birmingham will not be aware of the relatives’ demands.