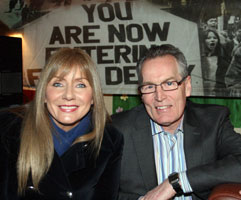 “A brilliant night”; “fantastic”; “the best evening’s entertainment I have had in years”; “people and politics and life – a great mix.” “A big thank-you to the organisers!”
These were just a few of the comments from some of the members of the large audience in St Kevin’s Hall, North Belfast, last Sunday night, when Sinn Féin executive minister Gerry Kelly hosted a ‘chat show’ like no other.
“A fantastic and imaginative night’s entertainment, all done really professionally, and Gerry Kelly was great craic!” said Imelda McGran, who had travelled from Dublin to attend.
‘Warmed up’ by the inimitable Barry McElduff – gaeilgeoir, GAA enthusiast and self-confessed friend of BBC shock-jock Stephen Nolan - the Sinn Féin MLA for West Tyrone regaled the audience for 15 minutes until Gerry Kelly’s Valium kicked in.
“I was nervous at the start as I’m usually the one getting the grilling,” confessed Gerry, afterwards. As he rose from his seat in the ‘green room’ to take his seat as host on the stage, his own house band regaled him with a Carly Simon song: You’re So Vain – I bet you think this show is about you! The band – three members of the LGBT Community and a piano,  included Sinn Féin Councillor Conor Maskey.
“Tonight is about letting our hair down and having a laugh,” said Gerry, before calling up his first guest, Danny Millar from the New Lodge Road, now one of Ireland’s top chefs. Danny said that “growing up in this area 20 years ago I could never have imagined I would be sitting here today getting interviewed by Gerry Kelly!”
“Come to think of it,” quipped Gerry Kelly, “20 years ago I would have found this hard to imagine myself!”
His second guest was one of Ireland’s favourite balladeers, Frances Black, who spoke about her family background: a father from Rathlin Island and a mother from Dublin’s inner city. Frances spoke about the influences on her and also the challenges, demands and dangers of being a singer. She spoke candidly about her own addiction and her work with the RISE foundation, which helps the relatives of those whose loved ones suffer from addiction.
Of course, towards the end of the interview Gerry persuaded Frances to sing. The song she chose was Ewan McColl’s, Legal/ Illegal, part of which goes:

It’s illegal if you are a traveller,
To camp by the side of the road,
But it’s proper and right for the rich and the great,
To live in a mansion or own an estate,
That was got from the people by pillage and rape,
That is what they call a tradition.

Gerry’s last guest was ‘Gorgeous’ George Galloway, the Respect MP, who remarked on Frances’s song and the fact that he knew both Ewan McColl and also his late daughter Kirsty, who was involved with him in protesting against the economic sanctions against Iraq before the war that had led to the deaths of thousands of children. He spoke about public figures who claimed to be doing their best and he remarked, “When all’s said and done, there’s a lot more said than done.”
The highly popular, pro-Palestinian MP and anti-war activist spoke about his work on aid to Gaza and in Lebanon and that famous day when he single-handedly took on the US Senate Committee who had accused him of being in the pay of Saddam Hussein. Their claims, he said, were “the mother of all smokescreens”.
In a combative defence of his position, he said he had met Saddam Hussein on two occasions  – the same number of times as US Defence Secretary Donald Rumsfeld.
“The difference,” he said to them, “is that Donald Rumsfeld met Saddam to sell him guns and maps  – the better to target those guns. I met him to try to bring about an end to sanctions, suffering and war.”
To the right of the stage in St Kevin’s Hall was a stand showing pictures of Che Guevara, Mairéad Farrell and Bobby Sands, which George praised and pointed out that in struggle each single activist played a crucial part and could change history.
Afterwards, he was given a standing ovation and was inundated for photographs and autographs.
“When George was talking he nearly raised the roof,” said Gerry Kelly.
North Belfast republican and former hunger striker Mary Doyle, speaking to An Phoblacht, said, “Gerry was great and everything was so well done, but he needn’t think he’s giving up his day job to take over the Jonathan Ross Show until after he wins the North Belfast seat!”