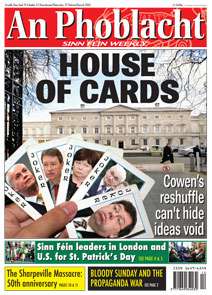 Brian Cowen this week made a few adjustments to his Cabinet in a reshuffle that will do nothing to revive an ailing government, except to tie the Greens closer to the Coalition. They were awarded with another junior ministry as a consolation for their expected wipe-out in the next General Election.
No serving minister was sacked in Cowen’s reshuffle; he simply filled the vacancies left by the resignations of Defence Minister Willie O’Dea in disgrace and of Arts, Sport and Tourism Minister Martin Cullen for health reasons. Pat Carey was promoted from Government Chief Whip to Minister for Community, Equality and Gaeltacht Affairs and Tony Killeen became Minister for Defence. John Curran TD was appointed Chief Whip. Green TDs Mary White and Ciarán Cuffe were made junior ministers.
While Mary Coughlan remained Tánaiste, she was moved out of Enterprise, Trade and Employment, a reluctant acknowledgement on the part of Cowen of her hopeless performance in that Department. Mary Hanafin was moved from Social Welfare to the retitled Department of Tourism, Culture and Sport. This seems to have more to do with internal Fianna Fáil politics than anything else, as Hanafin is not close to Cowen. Batt O’Keefe was moved from Education to Enterprise, Trade and Innovation and Eamon Ó Cuív from Community, Rural and Gaeltacht Affairs to the newly titled Department of Social Protection.
The latter title change is especially ironic, given the fact that this government has just cut social protections for the most vulnerable people in its last two Budgets. And while lip service was paid to the jobs crisis in Cowen’s speech, his changes mean that responsibility for the training agency FÁS will be divided between three Departments and the word ‘employment’ does not feature in the title of any Department.
It was on jobs that Sinn Féin Dáil leader Caoimhghín Ó Caoláin focused in his scathing response to the reshuffle. He told the Dáil on Tuesday:
“We will not endorse this charade of a government which should be shuffling out of office with their heads held down in shame. The focus today is on jobs for the boys and girls in Fianna Fáil and the Green Party as Cabinet ministers and junior ministers. But looking on at this game of musical chairs are over 432,000 unemployed people in this State. And there are further thousands of others looking on from overseas where they have been forced to emigrate by the policies of this government.
“One in four young people in Ireland is now unemployed. And what have unemployed young people got from the government in response to their plight, from the government that seeks our endorsement today? They have got a two-fingered Fianna Fáil/Green salute from a Coalition that cut dole payments for the young in Budget 2010.
“The Taoiseach should ask those young people whether they care a damn what faces sit around the Cabinet table or who was elevated and who was disappointed in the divvying out of the junior ministries.”

Harney to stay
Ó Caoláin pointed out that government health policy will remain the same:
“Minister Harney is staying on, prolonging her tenure in that office where she has made an inequitable health service even more inequitable and where she has promoted for-profit privatisation and ruthless centralisation. We know only too well the results of the disastrous health policies pursued by Fianna Fáil-led Government since 1997.
“The debacle in Tallaght Hospital that was addressed here before the St. Patrick’s Day recess was not simply the result of some glitch in that one hospital. It was an extreme example of the systemic failures in our health services. At the root of those failures is the two-tier, public-private, apartheid nature of the health system. That inequity breeds inefficiency. It leads to waste, which is compounded by under-resourcing. On top of all this, in Budget 2010 and Budget 2009, the Fianna Fáil/Green Government has imposed cuts that affect public patients worst of all.
“The Tallaght Hospital debacle perfectly illustrates the Pontius Pilate attitude of this Government. The Minister for Health & Children was told about the unread x-rays last December but apparently did not trouble herself to ask how many were involved or to keep on top of the situation to ensure that it was being addressed. We only have an inquiry now because a whistle-blower went to the media and the whole affair was exposed to public view. How long otherwise would it have taken the affected patients to be informed? Why was it not the Minister that made the situation public, in order to ensure openness, transparency and accountability? That is a question for the Minister to answer.
“This reshuffle signals no change in the policy of savage cuts to public services – a policy futile in its claimed intent to aid economic recovery and punitive in its effects on the people. To take just one example in education, I could point to a letter I received last week from a school in my constituency where a special class has been suppressed, two teaching posts cut, and children with a multiplicity of special needs put back into mainstream classes from which they had previously been removed as a result of assessment by a Department of Education psychologist.
“This reshuffle will preserve the economic approach of the Fianna Fáil/Green Government which is fundamentaly flawed. The slash-and-burn policy will not lead to recovery but to deeper recession. And just as this policy penalises citizens today, NAMA will penalise them in the future. The golden circle of politicians, bankers, property speculators and the corporate elite who profited most from the Celtic Tiger and who caused the recession are now protecting themselves at the cost of billions to future generations of Irish people.

Slash and burn
“The Fianna Fáil/Green cuts to public services and to public service pay have led to chaos in public administration in this State. This is the result of the government’s slash and burn strategy and its deliberate scuppering of the negotiations with the public service unions last December.
“Whatever may be said about the tactics of some of the public service unions – and the situation at the Passport Office is uppermost in people’s minds today – the truth is that those ultimately responsible are sitting on the government benches. And that includes the Fianna Fáil backbenchers who staged a sham revolt last December as part of the strategy to collapse the talks.
“Where was the backbench revolt when the government made across-the-board cuts to social welfare payments? Where were the resignations from the Green Party then?
“This government has left behind it a trail of destruction of Irish jobs, including flagship Irish companies. They have allowed valuable employment to die and skills to be squandered in SR Technics, Aer Lingus, Waterford Glass, the sugar industry and a myriad of small-and medium-sized enterprises throughout the length and breadth of the country.”

Smug Green TDs celebrate the fact that they now have six TDs and four ministers. They’re all right, Jack

Independent TD for Dublin Central Maureen O’Sullivan voted for the Fianna Fáil/Green Cabinet in the Dáil vote on the reshuffle on Tuesday while Dublin North Central Independent Finian McGrath abstained. O’Sullivan’s vote has already caused anger among her supporters. On the afternoon of the vote young people from her own constituency were protesting outside the Dáil at FF/Green cuts to youth services.