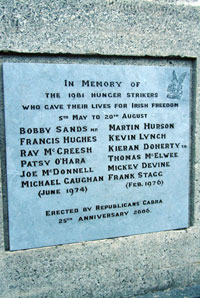 Members of the original Cabra H-Block/Armagh Action Group from 1981 last weekend unveiled a plaque in memory of the H-Block hunger strike martyrs aswell as hunger strikers Michael Gaughan and Frank Stagg who died in 1974 and 1976 respectively. Mick Finnegan, a member of the original action group and of the Caroll/Ashe Cumann, Sinn Féin carried out the unveiling at the bridge on Fassaugh Avenue. The ceremony was attended by Cabra republicans and local Sinn Féin Councillor Nicky Kehoe