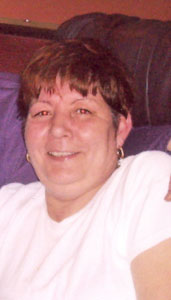 The passing, following a short illness, of fifty-one year old Mary Reilly of Crossragh, Mountnugent, County Cavan, has stunned not only her own family and local community, but republicans the length and breadth of Ireland.

Mary Reilly was a stalwart republican activist for whom no job that presented was either too great or too small.  Mary was always willing to play her part and did.

A keen GAA supporter, Mary was ever there in support of the activities and games of her local Mountnugent GFC.  Her club colleagues formed a guard of honour on the arrival of her remains at Ballinacree Cemetery following Requiem Mass in St Brigid's, Mountnugent on Wednesday 22nd November.  Fr Kevin Smith officiated, assisted by Fathers Devine and Gray.

Mary is survived by her grieving husband Seán, daughters Tara and Ciara, sons Eurich and Seanie and granddaughter Saoirse.  She is also survived by her parents Brian and Nancy Harten and by brothers Benny, Paul and Felix and sisters Annette and Patricia and by her extended family.

In the course of his address Ó Caoláin described the deceased as a woman of courage, of loyalty and of a deep love of family, her community and country.

"Mary was committed to the achievement of a united and free Ireland.  She placed no preconditions on her active participation in the struggle for Irish freedom.  Mary accepted the difficult decisions of recent years and was prepared to face the challenges now presenting.  Only death itself would take her from our ranks."

Ó Caoláin recalled Mary and Seán's trip to New York in 1997 promoting the interests of Mountnugent GFC and of speaking to them both in the City West Hotel last year at the 100th birthday celebrations of the founding of Sinn Féin.

"Mary lived life to the full and always gave it her best.  That was her motto no matter what she took on to do.

"Passionate about the struggle, passionate about sport and about so much else, she was most proud of her husband Seán and of her children.  On behalf of true republicans throughout Ireland and amongst the Irish diaspora globally, I extend sincere sympathy to Seán, to Tara and Ciara, to Eurich and Seanie and to Saoirse.  Our condolences too to Mary's parents, brothers and sisters and to all the bereaved.

David McCabe, who died recently, was a County Down man through and through.

He grew up with a passion and thirst for Irish history.

His mother's family held claim to a long lineage of republican activism and David carried a 1916 Cumann na mBan medal in his jacket pocket.

As a young man David experienced the the injustices and inequalities of British rule.  With a strong  social conscience, after his university degree David became a social worker and worked for the betterment of his area.

In 2004 David joined the Thomas Ruiséil cumann in Downpatrick and became a valued member.  His enthusiasm for discussion and debate was legendary.   He was a regular An Phoblacht seller and as one buyer put it - "not only did I receive the republican news I also received communication and information on events and political progress from David".

David was also a dedicated fundraiser.  A humourous story was when the Sinn Féin cumann in Downpatrick needed funds, David jumped into Noel Devine's taxi and bought a car load of republican merchandise from his own wages.  Needless to say he was sold out by that weekend!

David, until his sudden death, worked hard on the registration drive and was part of the Cost of Direct Rule campaign also.  He loved his republican friends and always honoured those who made the ultimate sacrifice.

From your friends in Sinn Féin.