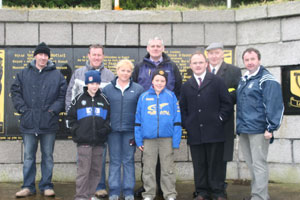 he main speaker.  After the speeches the raffle took place with first prize being a beautiful engraving on slate.

At the commemoration the next morning (Sunday), despite the extreme cold and threatening rain, a huge crowd assembled at the Square in Cullyhanna and paraded through the village, past the monument and on to the Chapel for the anniversary Mass.  There was a large number of banners from the local area, including the Michael McVerry Cullyhanna banner and banners from the local area, and one from as far away as Co.Cavan.

After the anniversary Mass, Councillor Colman Burns chaired the proceedings in the graveyard and introduced the main speaker Barry McElduff MLA from Co.Tyrone.

It is always very encouraging to see the large attendance at these commemorations and 33 years after his death; people still come in their droves to remember a man who gave everything to fight for Irish freedom.