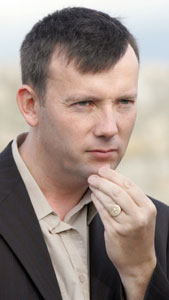 Sinn Féin Dublin Trade Union Group hosted a very successful discussion in the Teachers' Club, Parnell Square on the 30 November on the new social partnership agreement, Towards 2016 and where to now for trade unions in the 26 counties.

The meeting was chaired by Dublin South-East General Election candidate Councillor Daithi Doolan and addressed by Brendan Ogle, Regional Industrial Organiser for the ATGWU and Eddie Conlon, Honorary President of the Teacher's Union of Ireland who spoke in a personal capacity.

Eddie Conlon who has been involved in all the anti-partnership campaigns since 1986, outlined his problems with the Towards 2016 agreement which were mainly based on the fact that it is meant to protect low paid workers and doesn't.

Conlon said successive partnership agreements have given more and more significant benefits to employers. "The whole partnership system is geared to make the economy more competitive but it hasn't protected us. Wages have declined here more so than in any other Western country. Social spending is so low that it has not addressed the high levels of inequality. As well as that, this is the first time that public sector pay increases have been linked to increase in productivity. In the highly profitable retail sector, profits have grown at 3 times the rate of workers' wages. During 2006 real industrial earnings have fallen".

The trade union rep also illustrated how, although Towards 2016's pay agreement will barely match the rate of inflation, the pay increases included in it will not compensate for the steadily rising inflation figures for housing prices.

Brendan Ogle formerly of ILDA addressed the meeting on behalf of the ATGWU. Ogle, who has a long history of involvement in the trade union movement  dealt with social partnership the broader context of the relationship between capital and labour.

"Towards 2016 shifts the balance in favour of capital from labour", he said.