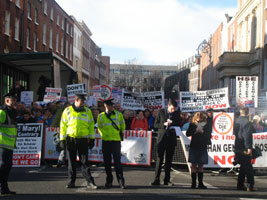 The Dublin demonstration was called by the Monaghan Community Alliance in support of the elected members of Monaghan County Council who had earlier taken the decision to mount an all-party picket on the Dáil.

Caoimhghín Ó Caoláin said that the accusation by HSE Chief Executive Brendan Drumm that those people campaigning for the retention of services of 'scare-mongering for self-interest' showed the contempt in which Mary Harney and the HSE hold the people of Monaghan.

About 350 people attended a demonstration at Our Lady's Hospital in Navan on Saturday, 2 December organised by Sinn Féin calling for a moratorium on cutbacks at the hospital.

Sinn Féin Councillor Joe Reilly said that in the region of €1.2m has been cut back from the hospital budget this year alone. There is also a serious overcrowding problem.

"Blood testing is outsourced at a cost of €20,000 per week. The hospital lost five interns at the start of the year and it is expected that seven more will be lost in the coming months. The Royal College of Surgeons has withdrawn accreditation for two junior doctors.", he said.

"We're calling for a paediatric service for under 12-year-olds to be established at Navan Hospital. We are also calling for decent A&E facilities. At the moment the A&E operates from a pre-fab.

"A recent HSE report suggests that there is a prospect of surgery services being taken away from the hospital entirely in due course. Orthopaedic surgeries have been cancelled on the excuse of upgrading the theatres. But in my view there would appear to be a concerted attempt underway to greatly lessen the 'put through' levels in the hospital - the less the number of patients going through the hospital the greater the argument for increasingly downgrading", said Reilly.

There is a huge demand locally to have Navan Hospital maintained and upgraded.

"We've collected 650,000 signatures in support of maintaining our hospital. The nearest alternative facility is 18 miles away in Drogheda. At the rate of the population increase in Navan it's estimated that about 60,000 people will be living here in about ten years or so. That statistic alone points to the grave need for a high-grade hospital for Navan", Reilly said.