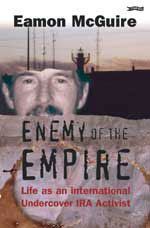 Our Man in Mozambique

Enemy of the Empire , By Eamon McGuire, Published By O'Brien Press, Price €11.95

Eamon McGuire's book Enemy of the Empire Published By O'Brien Press reveals a side of the author's life that was previously only known to a very few people.

Born in Castleblaney in 1936 to a Catholic father and a Protestant mother he experienced a relatively normal childhood apart from some minor bullying over his status as being the child of a mixed marriage.

Citing the harassment of GAA players on their way to games by B-Specials, apparently upset by any kind of social activity on the Sabbath, Maguire became increasingly aware of the sectarian nature of the Six County state as he grew up.

After stints in various jobs he went on to join the 26 county Air Corps with the intention of receiving a technical education specifically in the emerging area of electronics. It was here he met a 'Gunner' Tracey, a man who had participated in an IRA ambush on the British army in June 1921 for which two of his comrades had been hanged. Stories this man had to tell kindled the spark of republicanism in Maguire.

Leaving the Air Corp he went to work as an aircraft technician, a job that took him to many parts of Africa. Here he observed both post colonial degradation and direct colonial rule and combined with the stories of 'Gunner' Tracey his thoughts began to focus on the situation in Ireland. He describes his experiences in the various African and Middle Eastern countries in great detail and they make the book reading well before it comes to its most interesting parts.

Maguire returned to Ireland for a holiday in 1969 and was outraged at the events unfolding in the North. He was ready to become involved in republican resistance but going abroad on another contract he decided to see what the next few months would bring but did indeed become involved and what follows is an intriguing story of a clandestine journey through involvement in the development of IRA technical capabilities and counter measures too long to  recount in this review.

Another very interesting aspect of the book is Maguire's experience of jail in Africa, Ireland and eventually America, after his eventual capture by the CIA in Mozambique in 1992.

Overall the book is a fascinating account of how the political situation in Ireland led an ordinary man into an extraordinary world of intrigue. It is a story of how one Irishman responded to the emerging conflict in the Six Counties, the surreal double life his reaction forced him to undertake and the consequences he suffered for his role in the struggle for freedom. Very much recommended reading.