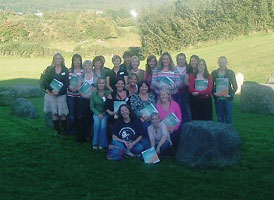 Women activists prepare for the future

The sessions have provided training in media presentation and public speaking.

Positive feedback from the first session in October identified the problem of a lack of structured and regular training.

"We are empowering our activists to deal with the challenge of building an Ireland of equals. It is in all our interests as republicans to have available as many skilled activists as we can, as we engage with those who oppose that vision", explained Eibhlín Glenholmes, National Co-ordinator for Gender Equality within Sinn Féin.

Four main barriers to the progression of women in the party, emerged at the training sessions. The first barrier was financial, as in a lot of cases women in the party tend to be in part time work because of other commitments, mainly childcare. This led to the identification of the second major obstacle - the lack of adequate childcare facilities. The third barrier was the issue of building up women's confidence. Where they are under represented in the party women often find themselves isolated within local structures. The last problem identified was the strong male culture that has emerged because of the predominance of men in the party.

Last weekend's session was well represented by each Sinn Féin Cuige area and saw the women activists put through the motions of being interviewed on film and participating in mock panel discussions.

The aim of the training programme is to produce more local women leadership, candidates and local representatives. The next training session is  due to take place in early spring. In the mean time a 15 page document has been submitted to the Ard Comhairle for ratification on the 15 December.