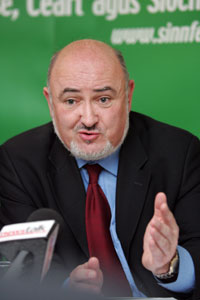 Sinn Féin Dáil leader Caoimhghín Ó Caoláin TD, responding to Minster Cowen's speech on the Budget on Wednesday evening in the Dáil, while welcoming a number of his proposals, said that "He had the opportunity and the resources to lift many citizens out of poverty but stopped far short of what was possible and what was required. Deputy Ó Caoláin went on to argue that the Minister could have done much more had he had the political will do so.

The Cavan/Monaghan TD said: "This Fianna Fáil/PD Coalition will be ten years in office next year and they need to be judged not on this pre-election but on their record over the past decade.   After 10 years we have a health system still mired in crisis, housing is unaffordable for many thousands of families and inequality and poverty are still with us despite the Celtic Tiger.

"For more than a decade now this government has had massive resources at its disposal to transform our health and education systems, to provide housing at an affordable level and to take senior citizens and those on low incomes out of poverty. In the last five years it has had exchequer surpluses of almost _40 billion and in November alone took in _1.7 billion more in taxes than expected.

"Yesterday, I called on Minister Cowen to be bold and imaginative, and to use today's budget to make a real, immediate and significant impact on the lives of those currently struggling to survive.  I want to welcome the decision of the Minister to direct his attention towards workers on low wages, senior citizens and those who rely on social welfare.  The increases he has set out are welcome but he could have done much, much more if he had chosen to do so.  He had the opportunity and the resources to lift many citizens out of poverty but stopped far short of what was possible and what was required.  And in some cases in order to appease his partners in government he took poor decisions, which will help those on the higher end of the income scale when those resources could have been used by those in desperate need.

"For example, today the government reduced the top rate of tax by 1% at a cost of _187 million when there was no demand from taxpayers for this.  For this same money the government could have dramatically improved the welfare of senior citizens by increasing the state pension by _34.80 a week as we proposed in our pre-budget submission.  Or a medical card could have been given to every single child under the age of 18 transforming access to medical care for thousands of families. The government had the resources to do these things but they did not have the political will.

"But the biggest problem with today's budget is that once again this government has shown that they have absolutely no strategy to address the core needs of ordinary people whether it is in health, education or housing.   The increase in the mortgage interest relief is welcome - Sinn Féin has asked for this as a targeted measures at those on or below average earnings  -  but where are the measures to help those who are languishing on social housing waiting list? There is no vision of a different kind of society, one based on equality and ensuring the needs of every person on this island are met. There is no appreciation of the unique opportunities this Government is squandering with monotonous regularity.

"The answer to all of these questions I fear is no. The fact is that today's budget will have little or no impact on any of these core issues.

In relation to specific measures which the Minister has introduced in today's budget, while there have been some advances, the fact is that those who were in poverty this morning, remain in poverty this evening."