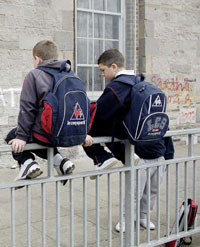 The figures showing that fee-paying students are three times more likely to go to university than a third level institute demonstrates at best a snobbery but more likely a growing apartheid in the Irish education system.

A decade of free fees for public sector colleges in the third level sector has allowed wealthier households divert money into funding extra tuition and classes for their children in second level and highlights the question of whether wealthier households are in fact buying their way into college.

It also raises the question of why is the coalition government grant aiding some of the private fee paying schools when the scarce funds might be better spent on tackling educational disadvantage rather than subsiding wealthy households.

The issue of what the coalition government is doing to tackle education disadvantage was raised last week in Leinster House by Sinn Féin TD Sean Crowe. He asked education minister Mary Hanafin how many pupils and schools were in the breakfast clubs scheme in a society where over 80,000 children are deemed severely disadvantaged and one out of every two children has experienced deprivation.

Hanafin told Crowe that 69,303 pupils in 1008 schools were participating in the scheme currently. The government is using funds from the dormant bank account scheme to allow schools entering the meals scheme provide "suitable facilities and purchase equipment".

Crowe asked minister Hanafin when will the breakfast club scheme be rolled out in all CLAR and RAPID areas and raised the issue of some breakfast clubs that only offer meals twice a week rather than every day and asked the minister would she ensure they ran over the whole school week,

Crowe also said he was concerned about the co-ordination and roll out of these clubs asking whether there was any plans in relation to school buildings and the provision of kitchens which could prepare hot meals.

Tellingly Hanafin offered no commitments on increased roll out or new school buildings saying that "the last thing we want is to set up big structures with environmental health officers".

The Sunday Tribune's Kevin Rafter who seems to agree with Seán Crowe's concern about the breakfast club roll out reported on the Dáil debate chiding Hanafin and the coalition government. Rafter wrote that their approach to breakfast clubs was "ham fisted". He neglected to mention in his article that the only reason the figures came into the public domain was because of Crowe's efforts in putting the issue on the agenda in the first place.

Two sides of Education in Ireland