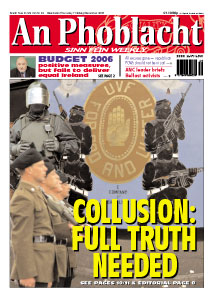 Widespread collusion between British state forces and unionist paramilitary death squads was behind many, if not all, of a string of gun and bomb attacks on both sides of the border that resulted in the deaths of 18 people during the mid-1970s. That was the conclusive finding of an Oireachtas committee report published on Wednesday, 29 November.

A subcommittee of the Joint Oireachtas Committee on Justice said people working directly for the British state were "engaged in the creation of violence and the butchering of innocent victims".

The subcommittee's inquiry which examined the findings of an earlier investigation by Mr Justice Henry Barron into nine attacks, including the bomb attacks on Kay's Tavern in Dundalk, County Louth and the Three Star Inn in Castleblaney, County Monaghan aswell as the Miami Showband massacre, said it believed that unless the full truth about British-loyalist collusion is established, and unless those involved admit to or are fixed with responsibility, there cannot be closure for the families of the victims.

In its report, the subcommittee said there were acts of "international terrorism" that were colluded in by British forces. "The British government cannot legitimately refuse to co-operate with investigations and attempts to get to the truth," it said.

The committee also found that the British cabinet was aware of the level to which its armed forces had been infiltrated by unionist paramilitaries and said there was an inadequate response to this.

The subcommittee said it further believed that unless the full truth about collusion is established there is always the risk of what occurred in the 1970s would occur again. "We are of the view that these matters cannot be swept under the carpet," it said.

However, much to the disappointment of survivors and relatives of those killed the subcommittee fell short of calling for a full public inquiry into the atrocities. The report's authors said that collusion was "widespread" and "endemic", but rather than a public inquiry, they called for a Dáil debate as a catalyst for further action and for the British authorities to look at the findings.

Commenting on the Report Sinn Féin Dáil leader Caoimhghín Ó Caoláin said Taoiseach Bertie Ahern should accept no more excuses from the British government and should press for full disclosure about the role of collusion in its war in Ireland. He called again for the Taoiseach to demand a special summit meeting with Tony Blair devoted solely to the issue of collusion.

"Today's report is yet another nail in the coffin of British government credibility on the issue of collusion. It reinforces the case that the Mid-Ulster UVF, which was responsible for the fatal bombings at Dublin, Monaghan, Dundalk, Castleblaney and other attacks, acted in collusion with British crown forces. The Report again highlights the fact that the Mitchell farm at Glennane, County Armagh, was the UVF base for attacks, that members of the RUC and UDR were members of the gang and that British crown forces at higher level were well aware of what was going on there", he said.

"In addition the Committee has again criticized the British authorities for their failure to co-operate with the Barron investigations and with the Committee's own work.

"The Taoiseach Bertie Ahern should accept no more excuses from the British Government and should press for full disclosure from that Government and all its agencies about the role of collusion in its war in Ireland. Successive reports and investigations, including today's, have shown how unionist paramilitaries were used by British armed forces, including the British Army, the RUC and MI5, as surrogates in their war. Civilians in Ireland were deliberately targeted in order to terrorise the entire nationalist population.

"This report again underlines the need for a special summit meeting between the Taoiseach and the British Prime Minister devoted solely to the issue of collusion", said O Caoláin.

Dublin did not do enough

Significantly the report noted the failure of the authorities in the 26 Counties to properly attempt to identify and bring to justice to the perpetrators. The Irish government complained to the British government in August 1975 that four members of the RUC in the Portadown area were also members of the UVF. The subcommittee said it could not understand why the documentation in relation to this stops dead in its tracks on 3 September, 1975, given the gravity of the issue.

The committee acknowledged the enormous suffering endured by both the victims and their families.

Speaking following the release of the report last week, Sinn Féin TD Martin Ferris said that former Fine Gael Ministers have serious questions to answer about their inaction during the British intelligence backed loyalist bombing campaign of the early 70s.

Speaking on Thursday, 30 November, the Kerry North TD said: "Over a period of 30 years British forces including MI5 colluded with loyalist death squads in the murder of hundreds of Irish citizens. Yesterday's Oireachtas report was deeply shocking detailing as it did widespread collusion in the deaths of dozens of people in this state in the 1970s. There are serious questions to be answered by both the British and Irish governments including those Fine Gael ministers who headed the government in this state in the mid 1970s.

"While Enda Kenny is correct in stating that hard questions must be asked of the British authorities, following his belated acknowledgement of their involvement in the murder of Irish citizens, his own party has many questions to answer. Former Ministers and the Taoiseach from the Fine Gael/Labour coalition of the 70s during, which the most serious and murderous of the activities referred to took place, need to explain their inaction and their indecision. Indeed, Deputy Kenny was himself a member of that government, and may be able throw some light on the murky machinations of his party at the time.

"At that time Fine Gael denied the existence of, and failed to investigate, substantial evidence of British involvement in the Dublin and Monaghan bombings. This included their failure to follow up on an admission from the British government, detailed in a memo released during the summer, that they had evidence the perpetrators of the bombings had recently been interned. The Fine Gael/Labour government led by Liam Cosgrave made no effort to extradite the suspects indicated or to even question them about the Dublin and Monaghan bombings. The information was kept secret and the families of those killed were never informed.

"All of the British inspired incidents were designed to influence the political agenda in this state and Fine Gael above all others were most willing to follow that agenda. The only way that this injustice can be tackled is for the Irish government to demand a summit with the British government addressing the issue of collusion in its entirety, by the British Government in the first instance making a belated full disclosure to the Barron Tribunal, for former members of the Cosgrave administration involved in the discussions with the British Government at that time to do likewise."

Within weeks of the infamous Miami Showband massacre on 30 July 1975, the identities of those who carried it out was known to those in the highest levels in the British government, according to the report.

The Miami showband played its final gig in the Castle Ballroom in Banbridge, County Down. In the early hours, the group left the town to head south in a minibus where they were flagged down by a group of armed men near the border. Believing it to be an official British checkpoint, they stopped. The band's members were told to get out with their hands up. A few seconds later, there was an explosion, killing two of the armed men. This was followed immediately by gunfire that killed three of the group - Fran O'Toole, Anthony Geraghty and Brian McCoy. Stephen Travers was badly injured and Des McAlea managed to escape by fleeing across a field in the darkness.

Mr Justice Henry Barron noted that a former RUC officer, John Weir, alleged the bomb used in the attack had come from a farmhouse at Glenanne which was frequented by British army intelligence.

The Miami case, and others investigated by him, said Judge Barron, "paints a clear picture of collaboration between members of the security forces and loyalist extremists. The inquiry would be shutting its eyes to reality if it accepted that such collaboration was limited to the cases in which collusion has been proven."

By September 1975, the identities of the death squad was known, judging by minutes of a meeting involving then British Prime Minister Harold Wilson, Britain's Direct Ruler in the Six Counties, Merlyn Rees, the future British Prime Minister Margaret Thatcher, and Airey Neave, the Conservative Party spokesman on the Six Counties, who four years later, was killed by the INLA.

The Oireachtas joint committee report concluded that "it was unfortunate that certain elements in the police were very close to the Ulster Volunteer Force and prepared to hand information to, for example, Mr Paisley. It [ the minutes of the meeting] states the army's judgment was that the UDR was heavily infiltrated by extremist Protestants who could not be relied upon to be 'loyal' in a crisis.

In the wake of the damning collusion report, Taoiseach Bertie Ahern said it was now "absolutely essential" that the British government co-operated fully with investigations into the allegations.

Seeking co-operation from the British authorities, the Taoiseach said the finding that they co-operated with unionist paramilitary death squads was "deeply troubling".

Saying that he had been "in touch" with the British government on the issue , Ahern said: "It is absolutely essential that the British government examine the findings of all of these reports, as well as the forthcoming MacEntee report  (into the Dublin and Monaghan bombings in 1974) and that it fully co-operates with all investigations into the serious issues that have arisen."

Copies of the latest report, and three previous ones, were sent immediately to British direct ruler in the North Peter Hain.

Sinn Féin TD Aengus O'Snodaigh welcomed the fact that the Taoiseach was to raise the issue with the British Prime Minster Tony Blair during their talks in London on Monday.

The Dublin South-Central TD said: "Last week's Oireachtas report into the role of the British State in the murder of citizens, through their policy of controlling and directing the activities of unionist paramilitary gangs, was the latest in a long succession of irrefutable evidence, which has recently emerged about the extent of the British state involvement in the murder of citizens across the island of Ireland.

"I welcome the fact that the Taoiseach is finally to raise these issues with the British Prime Minister during their talks in London today. Bertie Ahern needs to make it very clear to the Tony Blair that the policy of concealment and cover-up, which has marked their approach so far to this issue, has to end. It is no longer an option for the British government to ignore inquires like that established by Justice Barron.

"The families of those killed by the British state through collusion have long demanded an independent, international inquiry into these matters as the only way in which the truth can be revealed.  Sinn Féin absolutely supports these families in their campaign. It is now vital that the Taoiseach adds his voice to this call and ensures that the British government will be required to co-operate with such an inquiry in the future."