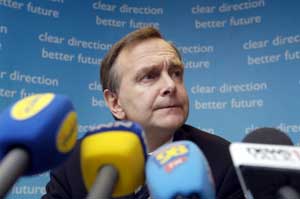 It's time to confront the revisionists who have infiltrated the pages of An Phoblacht! Last week An Phoblacht became the only newspaper in the country to welcome Michael McDowell's privacy bill, an understandable but completely wrong-headed reaction to decades of anti-republican bile from the media.

John O'Brien argued that media barons abuse their freedom and control of the media to promote the worst "right wing fanaticism" and that the privacy law is, therefore, a good thing. But does anyone really believe that restricting the media is going to result in a more progressive media? On the contrary, it will result in more stringency against investigative, challenging journalism. That air-headed pop stars and models might not have their 'privacy' invaded in future is the smallest possible bonus in a media regime that will have just one more mechanism that can be used by the rich and powerful to avoid scrutiny. And does anyone really believe that Martin Cullen, Brian Cowen and the rest of the cabinet are really worried about Bono's bum being photographed on a beach?

When law and order propagandists preach about the need for tougher, more repressive laws they do not argue that they want to control the population, trade unionists, republicans and other progressives. No; they cry crocodile tears about little old women terrorised in their homes and demand police state measures in order to promote their real agenda, namely, protection of the political status quo.

When politicians like Martin Cullen, the most right wing, Fianna Fáil minister in cabinet, bleats on about the invasion of his privacy he is using one exaggerated example of private intrusion - into the quite innocent relationship he had with his PR consultant, Monica Leech - as an excuse to attack press freedom generally. Cullen and his supporters were only too happy to seize on the excesses of part of that story - the incorrect claim of a personal relationship - to kick up a smokescreen about the huge amounts of taxpayers money that he spent on his public relations campaign. There is no better example of how privacy could be used to block an entirely legitimate media inquiry into how much money politicians spend on political PR and how they decide to dish out such lucrative contracts.

The entire Oireachtas, politicians and media alike, know that one or two recent examples of ill judged intrusion by a tasteless tabloid media, has been used to construct yet another deterrent to media scrutiny. The shortest of private conversation with any government minister and you will learn straight away that the aim of the privacy bill is to curtail political criticism - not personal intrusion. As many journalists and politicians have pointed out, there is already in existence a battery of laws, in the form of constitutional protections and Dáil legislation as well as European law, protecting privacy of citizens. So why the need for another privacy law?

Have we learned nothing from years of Section 31 censorship? It was not merely the straightforward elimination of Sinn Féin members from the airwaves that resulted from this law but also a general culture and atmosphere of censorship.

Are Republicans really happy that under this bill a 'private' person (for private read rich and/or powerful, most likely both) can go into court, ex parte and in camera, ie, without informing the other side and in private, and gain an injunction against publication of a story claiming intrusion? And that the media cannot even refer to this injunction?

It is not just the grubby tabloid media that has objected strenuously to the privacy bill and The Irish Times as well as all broadsheet newspapers have expressed their opposition. So, too, has the NUJ, citing the same argument, namely, that false concern with privacy will be used to block stories of legitimate public interest.

Republicans are quite right to complain that the media reflects largely the concerns of the middle class and the interests of big business and government. But the privacy bill will increase this tendency, not militate against it.

One prejudice that An Phoblacht does appear to share with the establishment media is the Dublin oriented view of the All-Ireland football championship which Dublin is always on the verge of winning before it is snatched away from them by dodgy referees, cheating culchies or sheer bad fortune - pity there's no diving Portuguese GAA players to blame.

My sporting colleague, Matt Treacy, was stung by that little joke about those Dub supporters whose eternal optimism in the face of football facts resemble that of Ingerland fans. He predicted, even before last weekend's Leinster final, that 'my' team will be beaten by the Dubs "in the Fall" (note the perennial presumption about Dublin automatically making it to the final - there's confidence for you, as always).

These odds are stacked in my favour as I support ABD (ie, 31 Counties) whereas Matt has only one team to rely on. In other words, I only have to get lucky once, whereas Matt has to be lucky all the time, to paraphrase another very sporting commentator.