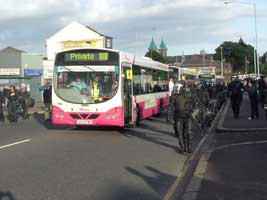 Adams revealed that Sinn Féin was in contact with unionist representatives and Protestant churchmen in an effort to ensure calm.

Sinn Féin spokesperson for Policing, Gerry Kelly spoke to the PSNI in North Belfast before Orangemen passed through Ardoyne, "to ensure that the violent scenes of last year when the PSNI and British troops attacked local residents were not repeated".

Adams accused the DUP and its leader Ian Paisley of playing no positive role in efforts to ensure peace.

Senior republicans, supported by up to 700 stewards, were on hand at other contentious marches. Martin McGuinness was in Maghera, Philip McGuigan in Dunloy, Pat Doherty in Castlderg and John O'Dowd was in Lurgan.

At Ardoyne, the scene of serious trouble over the last number of years, as Orange marches were forced through the nationalist area, relative calm prevailed.

Tension had been high with residents unsure if the Orange Order would adhere to a Parades Commission ruling that parade followers would not march past Ardoyne but be bussed up the Crumlin Road. Loyalist spokesperson Tommy Cheevers warned that Orange supporters would refuse to get on buses.

In the end, as republicans stewarded protesters at Ardoyne shops, four buses carrying Orange supporters sped up Crumlin Road with a PSNI escort.

Despite the presence of the republican stewards some missiles were thrown but no one was injured.

Joe Marley of the Aroyne Parades Dialogue group praised nationalists for their restraint and said their efforts to keep things calm proved "the community is serious about solving the issues".

Despite the efforts of those involved in keeping the peace at flashpoint areas during Twelfth parades it was business as usual for unionist sectarian gangs across the North. Widespread sectarian attacks saw Catholics, from Derry to Belfast, targeted.

In Derry 29-year-old Paul McCauley, and two friends, were set upon by a unionist gang on Sunday morning 16 July. They kicked McCauley severely about the head as he lay prone, fracturing his skull. Witnesses say the attackers left McCauley for dead before making their escape towards the unionist Irish Street estate.

According to the Derryman's father Paul the family was told that Paul died twice after the attack and had to be resuscitated.

As An Phoblacht goes to press McCauley remains in a critical condition in the Royal Victoria Hospital in Belfast.

Other attacks, carried out in some cases by the UDA, began in the run up to the Twelfth.