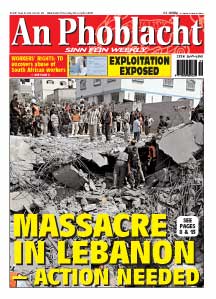 Nearly 300 people have already died as a result of Israeli military attacks in Lebanon and Palestine and many more will die unless Israel ceases the massacre we are witnessing.

It is clear that the Israelis are intent on causing further loss of life, potentially on a catastrophic scale, and on devastating Lebanon's infrastructure.

This is not the first time that Israeli forces or their surrogates have plundered Lebanon and murdered its inhabitants.

The Irish government needs to do much more than to secure the safety of Irish citizens in the region, welcome though this is.

They cannot merely say that the Israeli response is disproportionate. The government must now call in the Israeli Ambassador and demand an immediate end to the obscenity being perpetrated in Lebanon.

The government must insist that Israel comply with international law, and point out that if they do not, the Irish Government will support appropriate sanctions against Israel by the international community.

International organisations such as the United Nations and the European Union also need to take immediate action to bring this barbarity to a halt.

Sinn Féin has rightly called on the Irish government to propose the suspension of the preferential trade agreement between the EU and Israel, which provides Israel with favourable conditions when trading with EU member states including Ireland.

Recent events in Gaza and Lebanon are part of the wider problem that is the Palestinian/Israeli conflict.

For some time there has been a humanitarian crisis in Gaza. Recent attacks on essential services like electricity, water and sewage and the lack of food, have made a bad situation worse. Now this policy is being shifted to the Lebanon.

It may be that elements in powerful western states believe that it is in their interests to allow Israel to militarily defeat Hizbullah. But long international experience, including that of Ireland, demonstrates that political problems require political solutions. A peaceful resolution to the conflict in the Middle East is long overdue. It cannot happen without the active involvement of the international community.