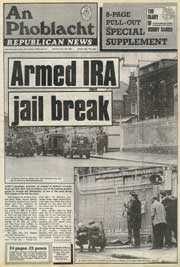 On the 10 June 1981, eight republican prisoners on remand in Belfast's Crumlin Road jail shot their way to freedom from one of the most heavily guarded prisons in Europe, in one of the most daring IRA escapes ever. The men came out the way they went in - through the front gate.

The regime inside Crumlin Road Jail on that day was just like any other. The prison had been the scene of several protests regarding strip-searching shortly beforehand, but the rules had been somewhat relaxed. On A and C Wings the remand prisoners were outside in the yard for exercise. Several men from each wing, as normal, were called for visits. Some of these visits were from solicitors and an area of the prison was set aside to allow legal teams and the accused a place to discuss their business in private.

When warders came to bring back one set of prisoners to their wing, the operation began.

One of the Volunteers produced a gun, forced the warders to release the other prisoners and then locked about ten warders in the cell. They then made their way to B wing's visiting area and arrested all the warders, visitors and solicitors who were there, before locking about thirty up in a room. One warder, named as Killen, went for his baton, was disarmed and hit over the head.

Two warders and a solicitor were ordered to strip and three of the IRA Volunteers, dressed in two uniforms and a suit respectively, calmly walked to the main gate which was opened for them. They then pulled guns on the real warders in this key security area, and made them lie on the ground until their five comrades ran across a small courtyard to join them.

Once outside however, the alarm was set off and British army sentries poured a hail of automatic fire at the prisoners from a watch tower before they could reach the front gate. Undeterred, the prisoners dashed through the bullets, weaving from side to side to throw off their attackers.

Outside the prison, cars had been parked by the IRA's Belfast Brigade in the car park of the health clinic beside the courthouse, their ignition keys hidden under the floor mats. The prisoners ran across the road towards the health centre, dodging bullets as they went. The escapees headed towards the loyalist Shankill area where they commandeered cars to help their getaway.

Stunned by the daring escapees, the crown forces erected checkpoints across Belfast and along all border routes.

As the men made their escape, clearly visible to republican prisoners in cells on the top landing of A wing, loud cheers went up and makeshift flags were flown from the windows.

Seven of the escapees, known as the 'M60 gang', were brothers Tony and Gerry Sloan, Gerard McKee, Joe Doherty, Angelo Fusco, Patrick 'Dingus' Magee and Tony Campbell. All were from Belfast and charged in connection either with an M60 machine gun attack in 1980 on an RUC patrol in Andersonstown, or with the siege on the Antrim Road in May 1980, when an SAS Captain was killed.

The eighth escapee was Pete Ryan from Ardboe, County Tyrone who had been charged with killing an RUC Reservist and a UDR soldier.

All eight men reached safe houses within the hour and after a lying low for a short while were spirited over the border to begin new lives 'on the run.'

One week later, at the annual pilgrimage to the graveside of Wolfe Tone, the father of republicanism, which is always a source of renewed strength for its participants, the crowd was given an added morale boost when at the closing ceremony, one of the escapees Patrick 'Dingus' Magee, made a dramatic appearance on the platform.

There were many more attempts to break free from Crumlin Road Jail before it finally closed its doors in April 1995, having being used as a weapon in the attempted suppression of the Irish freedom struggle for 151 years.