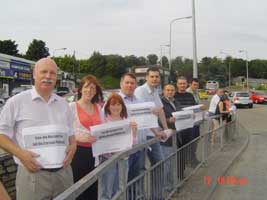 The imprisonment of the Rossport 5 has brought protests, pickets and demonstrations to towns across Ireland over the past three weeks. There have been huge rallies in the West, reflecting the outrage felt at the government's betrayal of Irish interests and the jailing of the five men. The campaign is holding a national Day of Action on Friday 22 July.

Castlebar Town Council has backed an emergency motion calling for the release of the Rossport 5. Sinn Féin Councillor Noel Campbell put the motion to the council's monthly meeting on Thursday 14 July.

Wexford Sinn Féin Councillor John Dwyer has said Wexford Town will be the location for Friday's actions in the county. It will be the fourth protest held in County Wexford in support of the Shell To Sea campaign following previous protests in Enniscorthy, New Ross and Gorey.

To mark the Rossport 5's 14th night of incarceration, a special protest was held in Minister Noel Dempsey's home town of Trim, County Meath on Thursday 14 July. Caitlín Uí Sheighin, wife of jailed Mayo man Michael Ó Sheighin, and Councillors Joe Reilly and Michael Gallagher of Meath Sinn Féin attended. The protest called on Minister Dempsey to act as a matter of urgency to address the situation in which the Rossport residents now find themselves.

A dispute erupted on Mayo County Council this week regarding a motion demanding the government process Corrib gas at sea. The meeting on Monday 18 July appeared to pass the motion unanimously. However, three hours later, Council Chairperson Henry Kenny, a brother of Fine Gael leader Enda, declared the motion not passed because the words, "this motion is resolved", were not used. councillors, and former council chairs say they have never heard such words being used in the putting of motions.

Sinn Féin Councillor Gerry Murray said: "So much for local democracy at work. Some councillors have made themselves a laughing stock in their eagerness to jump on the bandwagon as spokespersons for growing anger in the county at Shell's proposal, and the government and court's connivance with Shell to supply all their needs in an apparent robbery of the Irish people's resources."

More Shell subterfuge has emerged with evidence that the multinational has already begun work on its on-shore recovery station at Bellinaboy under cover of a forest. This revelation followed a statement by the Minister for the Marine and Natural Resources Noel Dempsey that he is commissioning a new safety review of the pipeline and a subsequent claim by Shell that no work would take place until that review was finished. These moves were presented as offering a way out of the current impasse which sees the five Mayo men in jail.

The work can only be seen from a rarely used back lane leading to Bríd McGarry's cottage. The Rossport prisoners unsuccessfully sought to raise the issue of the illegality of the construction last week.

During the court hearing Shell offered to remove the words "construction and installation work" from the terms of its injunction. This was presented as a concession to the prisoners, facilitating them in purging their contempt. But in reality it was an attempt by Shell to make its own situation compliant with the law. A full court hearing of issues related to the injunction is listed for October.

What now comes into clearer focus is that the Corrib pipeline has not come through any of the normal planning procedures either with the County Council or An Bord Pleanála. A Statutory Instrument, introduced on the back of the Gas Act of 1994, gives the relevant Minister powers to determine contracts for installing pipelines independently of planning procedures. In 1994, the Statutory Instrument applied to An Bord Gáis. Minister Frank Fahy has applied this power to the Shell project.

A major issue now emerging is the question of the actual value of hydrocarbon deposits the government has given away to the Shell-led consortium.

Officially the Corrib gas deposits are less than one-trillion cubic feet (TCF). However Wood McKenzie, in a report entitled Corrib — end of the end of the Rainbow, say Corrib could be up to 20 times the size of the Kinsale gas field.

Uncertainty surrounds the subject because oil companies closely guard the size of their deposits because of the direct influence of their prospecting results on the price of shares.

Wood MacKenzie estimates the deposits at Corrib to be between four and seven trillion cubic feet. Corrib is only one of several fields close by, which have shown promising results. There is also reason to suppose that beyond Corrib, and all along the Atlantic margin there are other deposits. Finds at Slyne and Dooish off Donegal are amongst newer finds indicating huge potential gas and oil finds for the future.

The value of these deposits was originally estimated around €3 billion per TCF, which puts the value of Corrib Field up to €21 Billion. However the price of gas is directly related to the price of oil, and oil prices have risen some 300% over the past few years, reaching in the last few years $60 a barrel. Most experts believe the current price is likely to move closer to $100 dollars over the next years, as oil becomes scarcer, existing deposits deplete, and wars for oil become more widespread.

One TCF is, in energy value equivalent terms, 150-million barrels of oil. With current prices this would mean that if the field were 7 TCF, and the price of oil $60 a barrel, a value on the Corrib deposit alone could be up to $63 billion.

This is the equivalent at current exchange rates with the dollar of €76 billion, which is a sizeable figure in relation to Ireland's annual GNP. This places Shell, under the government's 1992 legislation, in a bonanza position, with the Irish people getting nothing in return but continuously rising gas prices.

Downstream spin-offs for the local economy associated with Kinsale are absent with the Corrib proposal because Shell will not recover and clean the gas off-shore. Down stream industry and service spin-offs would only occur if Shell is not let to service the gas rig direct from Ayr as they wish, where construction and port facilities already exist.

North Sea Gas and Oil deposits are fast running out. Shell can continue to grow facilities and spin-offs to the British economy by grabbing at no cost, deposits off Irish waters.

The Good Friday Agreement set up the Loughs Agency, with the provision that the two governments would address the ownership of the seabed underlying the Loughs between the Six and 26 Counties, at Foyle and Carlingford. There is provision that ownership be taken over by the Lough's Implementation body as part of the Agreement. This would mean Irish waters would come under all-Ireland governance.

It is up to the people of Ireland, the vast majority of whom voted for the GFA, to claim these rights, and to demand the renegotiation of the deal whereby the Dublin Government has sold-out such valuable deposits in Irish waters.