Gerry Adams on Ardoyne, Seán Kelly, the IRA and the Rossport 5 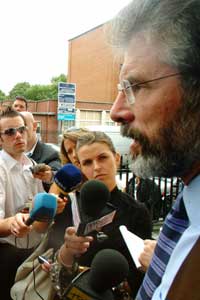 Gerry Adams was in Dublin to meet Taoiseach Bertie Ahern on Friday 15 July to discuss the Peace Process, Seán Kelly and the post-Ardoyne situation.

Speaking afterwards to journalists in Parnell Square he said that a very dangerous situation had emerged in Ardoyne, Dunloy and Derry last week but that this situation had been managed by Sinn Féin through advance work particularly in North Belfast. He said: "There has been a lot of focus on how it broke down but we got off very lightly — we got off very lightly despite the fact that Orangemen won't talk to the residents and that the Parades Commission made the decision that it did. The marching has been upping the type of situation that was avoided. We need to ensure that the marching season passes off as peacefully as possible. Nobody was killed in Ardoyne even though there was potential for a terrible disaster."

Adams appealed to the Orangemen to engage in dialogue as they did in Derry where an accommodation was found. On the riot that followed the disciplined protest by Ardoyne residents, Adams stated that "the vast majority of people supported the initiatives that Sinn Féin took" and that Nigel Dodds the MP for North Belfast "should talk to the residents of Ardoyne. It isn't tenable that with each contentious parade, society is brought to the brink. This problem cannot be parked until next year. It needs to be dealt with now. It's time for those within the Loyal Orders, and those unionist politicians who are among their leading members, to engage in a meaningful process of dialogue."

He said that rejectionist unionist politicians, who are also leading Orangemen, steered the Orange Order on a course which could have resulted in the political atmosphere being poisoned at a time when the IRA is engaged in its internal consultation and at a time when traditionally tensions run high.

Speaking about the arrest and detention of Ardoyne republican Seán Kelly he said: "This has only activated the party right across the island particularly in the North where a major campaign is developing and pickets have been held. It is wrong that Seán Kelly is in prison at this time and has effectively been interned. Peter Hain has made a mistake and this needs to be rectified. The re-incarceration of Seán Kelly is a big issue for young people in Ardoyne." He also pointed out that other prisoners on licence could suffer the same fate.

On the issue of the five Mayo men jailed for standing up against the Shell-led consortium's building of a gas pipeline across their land Adams said the imprisonment of the Rossport 5 was wrong and that the government's stance in standing by Shell was "a disgrace". He stated that he had said this to Bertie Ahern.

When asked about an imminent statement from the IRA Adams said: "The IRA should be given time to discuss the issue and that the two governments, the parties and the DUP in particular all have their own obligations."