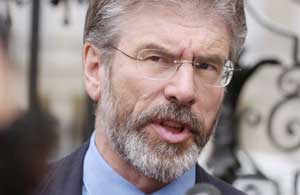 Gerry Adams has called on the British Government to give the IRA sufficient space and time to consider his call for an end to all military activities and to enable it to fully engage in consultation with the grassroots membership.

He also criticised the decision by the Parades Commission on Monday to force Orange marches through Ardoyne and nationalist West Belfast. It was, he said, "an extremely stupid decision". Last year, he added, a tragedy was only narrowly avoided in Ardoyne through the courage and quick-wits of Gerry Kelly and others who intervened to prevent a confrontation between nationalists and the Parachute Regiment getting out of hand. "I wonder who had the temerity to put the Paras into Ardoyne in the first place, and force through an Orange parade in the second," he added.

Against a background of heightened tension during the marching season this year, he said that Sinn Féin wanted to see Orangemen talking to their neighbours, and those in the host communities to bring about an accommodation. "That will only happen if the great and the good insist that they talk, and if they do talk then I think they will find that all of these things can be resolved."

Gerry Adams made his comments as he hosted the Sinn Féin Summer Reception for friends and supporters in London on Tuesday. Amongst the guests were a number of Members of Parliament and long-time, high-profile friends such as Tony Benn and Jeremy Corbyn.

He was accompanied by Martin McGuinness, Pearse Doherty and Sinn Féin's London representative Dodie McGuinness. Earlier in the day, the delegation held meetings with British government officials on the future of the Peace Process.

Gerry Adams said that he wanted to thank Sinn Féin's supporters in England for keeping faith with the party throughout its history and during recent difficult times.

"This year is the one 100th anniversary of Sinn Féin" he said, "and throughout that long 100 years there has always been an interaction and a connection with progressive people here in England and in Scotland and Wales — people who have recognised that the Union is not a good thing".

"Whatever you want to do with this island — and you are our nearest offshore island — we want to see the Union ended and we make no apologies for that. And we want to work with people here towards that end".

Turning to current events, he spoke about his recent appeal to the IRA. He did so, he said because he "was very concerned that unless the cycle was broken, the Peace Process would go into freefall and then disappear".

The danger was, he said, that with this lack of progress — partition still in place, a lack of real equality, no functioning institutions — people, and particularly young people, would start to ask whether politics can really work.

The most immediate imperative, he continued, was on British Prime Minister Tony Blair and Taoiseach Bertie Ahern to implement the Good Friday Agreement. "It doesn't matter about waiting for IRA. It doesn't matter about waiting for the DUP. There are rights and entitlements, justice issues, and a whole range of other matters which both governments have signed up to which they need to implement anyway. This Labour Government was elected on a manifesto which contained all of those points. It is mandated to do it.