New Editor at An Phoblacht 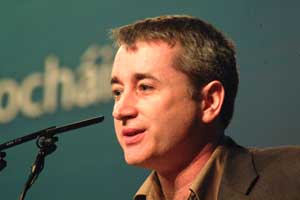 An Phoblacht has a new Editor. Seán Brady from Dublin has taken over the position following the departure of Martin Spain who has been the paper's Editor for the past six years.

Spain became An Phoblacht Editor in March 1999. He began writing for the paper ten years before that in March 1989, a time when the anti-republican, revisionist ethos was at its height. Of his time in An Phoblacht he said: "I enjoyed my time working at the paper which I found an honour to be associated with and one which I found challenging.

Brady thanked Martin Spain for his contribution not only as editor over six years but also as a journalist for ten years before that:

The new Editor is a former Chairperson of Sinn Féin in Dublin but previously worked at An Phoblacht as a journalist for over ten years in the late 1980s and through the 1990s.

Speaking to An Phoblacht this week Brady said: "With Sinn Féin growing in electoral and political strength across the island it faces new challenges and opportunities. During this 100th anniversary year of the party there are a range of plans and initiatives to consolidate and build upon the party's continued growth. One of the new initiatives will be the re-launch of An Phoblacht with a new format and emphasis, while at the same time retaining the necessary qualities that make An Phoblacht the quality publication it is.

"An Phoblacht remains the only newspaper North or South to give an unmediated, republican analysis on the important issues and events of the day in our country or around the world. It has covered stories and events which the mainstream media have shamefully ignored or distorted.

"The paper carries out a number of functions. It is an educator, an organiser and a publiciser. In the time ahead I would like to see it sharpen its campaigning edge. Like everything else it must continue to adapt to changing conditions. That is the challenge in the time ahead. I look forward to working with the party and the staff of the paper to facing that challenge and the new opportunities that exist.".