Talks and tension in run up to 12th 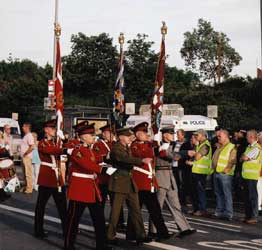 Orangemen marching through the Short Strand

Presbyterian Minister, Dr Joseph Fell defended an agreement that will see Orangemen marching in Derry, including along the West Bank of the city for the first time in 13 years. Accommodation was reached after engagement and dialogue between the Bogside Residents' Group and representatives of Derry's Orange Order leadership. The city's Chamber of Commerce chaired the talks.

Fell, who had been involved in the Derry discussions, was forced to defend his actions following criticism from the head of the Orange Order, Robert Saulters. He accused those involved in contact with local nationalist residents' groups of being in breach of Grand Lodge policy. In a provocative statement Saulters and his deputy Reverend Stephen Dickinson warned Orange Order members against contact with Sinn Féin/IRA backed residents groups.

Dr Fell, the minister at Derry's Ebrington Presbyterian Church said the criticism had appaled him. He pointed out that the talks in Derry had involved churchmen as well as business and community leaders. Fell said he wanted Orangemen to be able to come to the city on the 12th to celebrate their culture in a peaceful way.

Approximately 3,500 Orangemen will parade through Derry City centre on 12 July. Businessman Garvan O'Doherty, who chaired the talks between the Orange Order and the Bogside Residents' Group, described it as an historic breakthrough. O'Doherty said there was no reason why the lessons learned in Derry could not be employed elsewhere.

Sinn Féin's Mitchel McLaughlin described the accommodation over parades in Derry as a beacon for other areas across the Six Counties grappling with the issue. "This shows that there is no substitute for dialogue and inclusivity. We hope that people involved in disputes in Belfast and elsewhere would adopt the same approach as the people of Derry. A lot of useful work has been done and this agreement stands as an example of how dialogue triumphs," said McLaughlin.

Saulters had also criticised Belfast Orangemen after in emerged that a senior West Belfast Orangeman, William Mawhinney had held direct talks with representatives from the Springfield Road Residents Group. But despite the understanding in Derry a similar accommodation failed to materialise in Belfast.

An offer by the residents‚ group to accept a controversial Orange Parade along the Springfield Road on 12 July has been cold-shouldered by the Order. Mindful of the day-long tension that would result, the residents were not prepared to accepted a second parade on the evening of the 12th.

"The only conditions are that there are no paramilitary trappings, particularly to the UVF man Brian Robinson, no music and that the parade goes through the Mackies site," said residents‚ spokesperson Seán Murray.

"This was not an easy decision to take and is an honest effort by nationalists to reduce tensions between the two communities. Even this week we offered talks with the Orange Order but to date we have had no reply," said Murray.

The Order's refusal to engage with local residents was rewarded a few days later by the Parades Commission's decision to allow an Orange parade with bands through Workman Avenue and along the Springfield Road on the morning of the 12th.

Fears of further violence in North Belfast are mounting after the Parades Commission decided to allow an Orange Order parade through the nationalist Ardoyne area. The Tour of the North parade in June precipitated serious rioting and the local people believe violence could escalate with the next parade.

The decision to allow the Orange march past the Ardoyne shops has been described by Sinn Féin's Gerry Kelly as "deeply flawed and without logic. It will cause widespread anger and undoubtedly has the potential to create enormous difficulties. It is the wrong decision and should be reversed," he said.

Local priest Fr Aidan Troy said he had been saddened by the Parades Commission's decision. "This has the potential to be very damaging to everyone and I would call for some intervention to bring about dialogue. I feel deeply sorry for the families who will have their homes closed off for hours during the parade."

Troy called for a moratorium on parades until a process of engagement and dialogue has been initiated. "No Parades Commission determination or police strategy will ever solve this essentially human relations issue, said Troy.

The priest, who came to public prominence during the unionist paramilitary blockade of Holy Cross School, said it was a moral duty to speak out against further parades and protests until each side had engaged with the other.

It has emerged that the policing bill for the abandoned Whiterock parade last Saturday was a staggering £100,000, while the Order‚s Tour of the North cost the taxpayers a mere £75,000. The cost of parades and worse still the repair bill accompanying Orange bonfires is increasingly resented by ordinary citizens in the Six Counties.

There is tension in South Antrim in the run up to the 12th after it emerged that loyalists had filed to march in Stoneyford on 11 July along a new route which would take them through two new housing estates. The parade has been organised by the Pride of the Village Flute Band and a further 60 loyalist bands are expected to take part.

The band parade is usually along the main street but the Beeches and Stonebridge Meadows have been added to the route this year, said Lisburn Sinn Féin Councillor Paul Butler. The two recently build private developments have attracted a number of Catholic home-buyers.

"It is widely believed that the only reason they have change the route is to intimidate and provoke Catholics living there. This is nothing other than a coat trailing exercise designed to strike fear into Catholics who have moved into these estates," said Butler.

At the height of the Drumcree stand-off, loyalist death lists including the personal details of hundreds of Catholics including nationalist politicians was discovered in Stoneyford Orange Hall. The haul was subsequently accredited to the Orange Volunteers, a unionist paramilitary organisation associated with the UDA with an extreme fundamentalist ethos and organised in support of the Orange Order.

Last year a Catholic family was intimidated out of the Stoneyford area after they objected to the local Orange Order marching through the Beeches estate wearing Orange Volunteers t- shirts.

Tension has been further heightened by provocative displays of union flags and the erection of an Orange arch in the mixed villages of Dunmurry and Glenavy. "Dunmurry has endured a campaign of sectarian provocation and intimidation over the years," said Butler, "this is a time when we should be trying to work together towards ensuring a peaceful summer, not marking out areas as unionist territory".

The construction of an Orange arch in the village of Glenavy against the wishes of local residents has also heightened tension within the area.

The Garvaghy Road Residents Coalition has welcomed the Parades Commission's decision to re-route the Orange Order away from the nationalist area. The decision came against the backdrop of a number of serious sectarian incidents in Portadown in recent days.

"The town had been relatively peaceful for a long time and a lot of people had been surprised by the severity of some of the recent loyalist attacks," said residents‚ spokesperson Breandan Mac Cionnaith.

The potential for further trouble was clear said Mac Cionnaith. "You have the Drumcree march on Sunday, the loyalist bonfires lit on Monday and then there's the county demonstration on 12 July," he said. The onus was on the Orange Order to ensure the events pass off peacefully said Mac Cionnaith.

In County Down Orangemen have threatened to re-ignite the sectarian blockade of the Catholic Church in Harryville if unionist parades are re-routed in Ballymena. The threat came as it emerged that the Parades Commission was to rule on a march in Ballymena for the first time.

Leading loyalist Billy McCaughey said the loyalist picket may resume if the parade was re-routed away from the mainly Catholic Market Road area. The threat emerged as The Church of Our Lady in Harryville cancelled Saturday night Masses throughout July and August to avoid sectarian intimidation. The Saturday night Mass was the target of a sustained 20-month campaign of intimidation by unionist mobs between 1996 and 1998.

Meanwhile Declan O Loan, husband of the Police Ombudsman, was forced to abandon a DPP meeting in Ballymena following unionist intimidation. Around 60 flag-waving and chanting unionists occupied Clough Community Centre after O Loan called for Orange marches to be re-routed away from predominantly nationalist streets in the north end of the town.

Ironically this blatant display of sectarian intimidation serves to illustrate precisely why nationalist residents should not be forcibly subjected to public displays of unionist supremicism.

And as if the Orange marching season wasn't a sufficient source of tension, the UVF is planning a mass rally and march in West Belfast this Saturday. Around 2,500 unionist paramilitaries accompanied by 50 bands are intending to march along the Shankill Road in a show of strength aimed at intimidating rival unionist paramilitaries in the LVF out of the city.

The move follows the UVF killing of LVF associate Jameson Lockhart last Friday. Lockhart is a known associate of two brothers from the Ballysillan area who are senior members of the LVF. Fears of further unionist paramilitary feuding have accompanied the killing. More than a dozen loyalists have been killed during internecine feuding since 1996.

Earlier in the year an attempt was made to kill Lockhart as he drove through the Highfield Estate in West Belfast. He gave the name of the gunman to the PSNI and a 22-year-old was subsequently charged with three counts of attempted murder and possession of a handgun.

A fracas developed between UVF and LVF supporters, involving Lockhart, during a recent court appearance. It is thought that the 25-year-old was shot dead because he was due to give evidence against the defendant in the case.

The UVF and LVF engaged in bitter feuding in 2004 after the UVF shot dead east Belfast LVF leader Brian Stewart. A series of tit-for-tat attacks left families fleeing their homes in east Belfast and County Down.