Defending the rights of children in Nicaragua 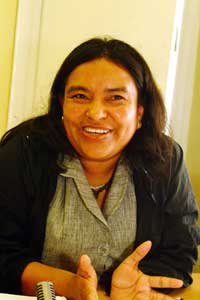 Nicaragua is one of the 18 countries chosen by the US and Britain to benefit from a package that will see part of its external debt cancelled. Many feel this is not enough.

New international policies facilitating equal treatment in the area of trade are essential to ensure such countries have a fair chance to develop their economies. The question is whether ordinary citizens will benefit through increased social investment.

For Maria Haydee Bello, a member of the Centre for Education in Health and Environment (CESESMA) in Matagalpa, Nicaragua, it is up to civil society to "keep an eye and make sure that the money that will not be needed to repay international loans is used for the improvement of social services and job creation and not to increase the mega-wages of the Ministers and Prime Minister" This week Maria spoke to An Phoblacht.

CESESMA is part of the international project Positively Global which looks into the positive and negative aspects of globalisation from the experiences of South Africa, Senegal, Nicaragua, England, France and Germany.

Maria has travelled to Ireland to meet with representatives of trade unions, Trocaire and Development Co-operation Ireland, who fund some of the organisations' projects.

CESESMA's work is "to promote and defend the rights of children and young people" in a country, like many others, where rights are not worth the paper they are written on. Nicaragua, ratified the UN Convention on the rights of the Child in article 70 of its Constitution. However, when the government fails to uphold the rights of the youth, it is up to organisations like CESESMA to make those rights real. Maria's organisation tries to improve the living conditions of children in Nicaragua's countryside. It works on educative processes with children and teenagers to make them aware of their rights and duties and how children or their parents can make use of these rights. Most of the communities where CESESMA work are situated in the area of the big plantations, in the North of Nicaragua.

Asked about the reaction of the landowners to efforts to educate workers' sons and daughters? Maria explained: "Usually we never deal with landowners, as those responsible for the plantations are their foremen and/or administrators. In the coffee plantations there are no schools and the only things kids do is work picking up coffee. Our work centres on improving the children's working conditions and at the same time, trying to get them out of child labour through non-formal educative activities but very much related to subjects included in the schools' formal curriculum.

Recently CESESMA worked in a project localised on the coffee growing areas. Initially we reached an agreement with the foremen and administrators and then we started working in two parallel processes: first with the parents and teens on the area, and at the same time, an awareness process with foremen, administrators, etc.

Then, in the plantations where there were no schools, a room was equipped to work as a Montessori and primary school, so all the kids participated in schooling. At the same time, we had been working with the teachers so they would be ready to adapt their methods and provide a more engaging education to the children.

This was a very interesting process. The project lasted for three years, after which we had to leave as we had run out of funding. However, about 60% of the landowners took over the expenses, and in those cases the school is still running. It also important to understand that some of the coffee plantations were not sustainable at the time as coffee prices had dropped and that could have been one of the reasons why some of the landowners decided not to keep the school running. But in these plantations, the communities still maintain a non-formal educative process, like teaching crafts, puppet theatre, reading... Also, the government's Education Department decided to fund six teachers.

In summary, it was a success as it increased the numbers of kids in education and decreased cases of child labour.

Child labour is outlawed, so how it is that the Nicaraguan government does not put an end to it?

The coffee crop is ready in October, and the parents take their children with them to the harvesting. However, whatever coffee is picked by the children is added to the amount picked by the parents, so this child-labour is invisible. If there is an inspection, the landowners can show the plantations records and there will not be anyone under 12 years of age working for them. However, if you go to the coffee plantation and look, you'll realise that the reality on the ground is very different to what the records show. In fact, children work from when they are six years old.

As your organisation creates awareness among children and adults of their rights, it is possible that at some stage it may create situations of conflict in the plantations, as workers maybe looking to exert rights against the wishes of the landowner. Have CESESMA consider this?

This is why we work with the Ministries and the landowners. Of course there will be conflict. In fact, there are already children and teenagers that have already benefited from our project and who are asking for proper working conditions. It is important to remember the dangers of working in coffee plantations, where the plants are being sprayed with poisonous chemicals, etc. So some workers are not asking for masks at work.

One of your areas of work is that of violence against women?

There is a project call Girls Network, which focuses on creating a space where girls can express themselves, because there is a lot of violence and abuse in the families and society. This is a space where they find each other, they help themselves and the girls can reflect and find solutions. Because the way it works in our organisation is that those who come to us become educators, facilitators, and then they help others who may be on similar situations to their own.

We feel it is also necessary to organise and educate the boys, and in all projects boys and girls work together, but we are considering initiating projects with boys to help eradicate the violence inherent to machismo. We use role play, puppets, theatre...