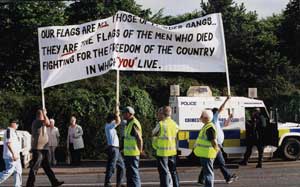 Loyalists sending out a message to nationalist residents. It reads: "Our flags are not those of murder gangs. They are flags of the men who died fighting for their country in which you live."

While last week witnessed agreement between the Bogside Residents' Group and the Orange Order pointing to the effectiveness of meaningful dialogue, the prospects of reason prevailing around contentious sectarian marches elsewhere in the North have all but been dashed by the general raising of the sectarian temperature.

Mitchel Mclaughlin led a party delegation on Monday morning to meet with the Parades Commission to discuss a number of contentious parades across the North. The meeting was at the request of the Commission. Orange marches pushed through nationalist areas are anti-Catholic and inherently offensive. McLaughlin raised with the Commission the example provided by the process of dialogue put in place in Derry. It was made clear to the Commission that the situation of republicans policing and dealing with the aftermath of bad decisions on Orange marches is no longer tenable.