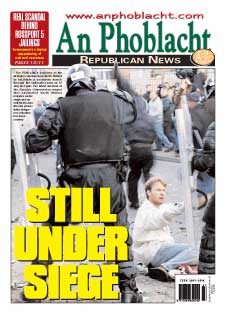 Adams said: "An extremely volatile situation has been created in North Belfast by the decision of the Parades Commission to allow the 12 July marches.

"I understand, support and appreciate the right of the Orange Order to march. However they need to engage in real and meaningful dialogue with local residents in areas where concerns have been raised about their marches. In Derry such a process of dialogue was embarked upon and an accommodation was reached.

"Without dialogue no accommodation is possible. Dialogue obviously presents a problem for some Orange leaders. This is not surprising, given the history of the Order. However when compelled to do so the Orange Order have engaged in dialogue. When they can avoid this as in North Belfast they do so and are rewarded.

"Sinn Féin opposes the two marches through nationalist areas of North Belfast both on the morning and the evening of the twelfth. It has fallen on us, because we represent people in these areas, to try and marshal bad decisions taken by the Parades Commission.

"A number of factors however make this task all of the more difficult on this occasion. Former republican prisoners have in the past provided an invaluable service in these types of situations. However with the arrest of Seán Kelly I won't put pressure on any former prisoner to provide this service, although some may well still step forward and I appreciate and welcome that but I can understand why no one released on license would want to risk incarceration.

"Sinn Féin will seek a formal review of the decision and have placed this into the hands of our solicitors. We will be engaging with a wide range of opinion in the areas most affected by these parades in the coming days.

"I am also appealing for calm and for peaceful protests against the Parades Commission decisions. Violence on the streets will not help anyone. It will serve the agenda of those opposed to change and will erode further confidence in the wider political process."