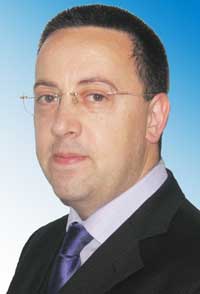 Felix Gallagher was co-opted onto Fingal County Council as a Sinn Féin Councillor at the monthly meeting of the North Dublin local authority in County Hall, Swords, on Monday.

Gallagher is a Community Development worker in Corduff, and has worked in the local area over the last number of years. Currently he is engaged in a broad range of projects, including the local Drug Task Force (Policing Forum), Blanchardstown Social Inclusion Group, Corduff Facilities Park and Blanchardstown Playground Group. Gallagher is a long-standing republican, having joined Sinn Féin in the early '90s. He has worked for and contributed to An Phoblacht . With a BA Degree, Felix Gallagher specialises in Community Development. He is married with a young family.

Felix Gallagher replaces Martin Christie who stepped down earlier this year but who remains an active member of Sinn Féin.