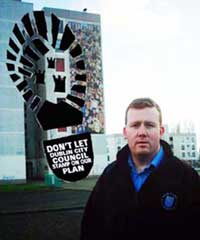 Sinn Féin Dublin City Councillor Andrew O'Connell has welcomed the victory by Inchicore and St Michael's Estate residents in their battle to re-establish a people-centred plan to transform the area. In the latest development Dublin City Councillors have voted to reject a proposed developer-led plan being foisted on the area against the wishes of local residents.

The Fianna Fáil/PD government, through Dublin City Council broke their original promise to local residents by slashing an agreed €83 million visionary plan for St Michaels. After three years of consultation, suddenly and without warning the plan was scrapped.

Working behind closed doors with private interests the Council developed an alternative plan, which would have involved the sell-off of public land to line the pockets of developers, and the loss of initiatives needed to ensure a strong and sustainable community.

At a meeting of Dublin City Council on 6 September a proposal for this new and unsatisfactory plan was rejected by Councillors, including all of the Sinn Féin representatives. The City Council must now go back to the drawing board in relation the development of St Michael's Estate.

This victory was the result of sustained campaigning by local residents organisations to reinstate a people-centred plan and to involve residents in consultation regarding the future development of their area. Sinn Féin gave full backing to this campaign from the beginning.

Councillor Andrew O'Connell has called on Council officials to immediately get back around the table with local residents and community groups and restart consultation with the aim of developing a new plan that has a proper mix of affordable public and private housing, sensible integration with the broader community in Inchicore, adequate re-housing for local residents and sufficient services and amenities to sustain community living.