Time for a revival of real farm co-ops 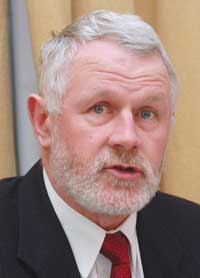 A few weeks ago I attended a meeting in Mitchelstown that was organised by the local community in reaction to the announcement that the Galtee factory in the town is to close in October. This will be at the cost of 170 jobs, the loss of a buyer for locally produced pigs, and all the down stream consequences which it will have on other local enterprises, shops, schools and so on. A further 100 jobs will be lost at Roscrea.

The company responsible for the closure - Dairygold - describes itself as a co-operative and yet the manner in which the decision was made and the reasons behind it illustrate what a long way co-ops such as Dairygold have travelled from the aims of farmers co-operatives as they were originally established.

Far from serving the interests of the farming community and having as their primary aim the promotion of the food processing industry, the "co-ops" have been transformed into businesses in which the production base can be sacrificed if necessary in order to boost profits. For example, in June Dairygold announced that it plans to open 30 DIY outlets.

Dairygold still describes itself as a farmer owned co-operative and has over 1500 shareholders and indeed a majority of those shareholders have voted to give management the right to introduce 'rationalisation' plans that include the loss of hundreds of jobs. So the question needs to be asked as to where the real interests of farmers lie, and in what way ought those interests be linked to those of the wider community and especially those of the workers employed by Dairygold and other co-ops.

The International Co-op Alliance defines a co-op as: "an association of persons united voluntarily to meet their common economic, social and cultural needs and aspirations through a jointly-owned and democratically controlled enterprise", and that it must be based on democratic control and participation by its members; education of its members; co-operation between individual co-ops, and promotion of the community. It is clear from the above that Dairygold, and it is not the only example, fails to meet those criteria.

While workers in Mitchelstown and Roscrea encounter the harsh reality of the way in which the likes of Dairygold are run by losing their jobs, the livelihoods of farmers are threatened in a different manner. The most obvious one is the way in which not only has the share of the retail price of food that goes to farmers fallen consistently, but in fact the actual price paid has also done so across a range of products.

While that has happened the profits being made by agri business have risen. That contradiction led to the attempt by the majority farmer shareholders to convert Glanbia, which was the result of a merger between the Avonmore and Waterford co-ops, back from being a public liability company into a co-op. As part of their bid the Fresh Milk Producers cited evidence that proved the correlation between cuts in the price paid to farmers for milk, and the increase in profits and earnings per share.

However, as other observers commented, transforming Glanbia into a co-op on the model of Dairygold would make no difference to milk prices as Dairygold and other co-ops were actually paying farmers marginally less for their milk at that time than Glanbia and the other major plc the Kerry Group.

Farmers incomes have been squeezed in other sectors besides milk, and this has led to ongoing tensions between the farmers organisations and the beef processors. There are a whole range of other food products where farmers only receive a small portion of the price charged to consumers. In one example, I discovered that apple growers only receive 20% of the retail price.

It is apparent that the reason behind this is not just the role of the processors, but also of the major retailers. Indeed the largest share of the price paid to the consumer now goes to the retailer with the major multiples being the driving force behind the shrinking of the share that goes to the farmer, without any benefit to the consumer despite their all-pervasive advertising claiming the contrary.

It is of crucial importance therefore that the farming bodies begin to address this issue in their own interests but also in the interests of consumers. A way must be found to revive genuine co-operativism as a means to challenge the increasing dominance of corporate agri-business. Trade unions representing workers in the processing industry should also begin to look at this issue rather than adopting the same generally passive attitude that marks their relationship to other businesses. Co-operatives should be run in the interests of both the farmers and those who are directly employed by the co-ops.

It is also something that consumers have a direct interest in as there is more common ground between the producer and consumer in relation to food safety, standards and price than there is between the consumer and retailer, or the consumer and the major processors. One way in which the gap between producer and consumer can be bridged is through the revival or establishment of traditional farmers markets and Sinn Féin Councillors are committed to promoting this on local authorities.

However, the main thrust of a new approach to the processing and marketing of food will have to take place on a larger scale at the level of the Dairygolds and the Glanbias. Farmers will have to take positive steps towards reclaiming control over the sale of their produce or else end up in the same situation as most farmers in the United States where the producer is rapidly becoming an employee of the giant corporations.

As farmers receive notice of their entitlements under the new Single Farm Payment, signalling the advent of the most radical change in the CAP since 1973, the time is now ripe for an overall radical rethink on the way forward for Irish agriculture including the revival of real co-operativism.