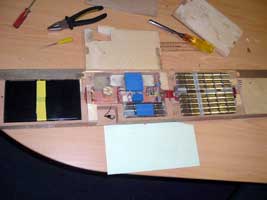 Last Monday night a bugging device was discovered under floorboards in an upstairs room at Connolly House, Sinn Féin's Andersonstown office. The sophisticated electronic listening device was disguised as a wooden joist with two microphones attached to false nail heads. One microphone was directed towards a downstairs constituency office and the second into the upstairs conference room. Packed into the five-foot wooden construction were dozens of batteries and a number of transmitters.

This is the seconded bugging device discovered in the last 10 days. The first was uncovered by workmen mending a roof in a block of flats in West Belfast. Packed under the eaves, the device led to a microphone embedded in the ceiling of a flat belonging to a party member who works in Gerry Adams's constituency office. In December 1999 a vehicle used by Adams and McGuinness during crucial meetings with the IRA was also bugged.

"This is not the way to make peace," said Adams, "it is wholly unacceptable for the British government or their securocrats to be engaging in bugging operations against political opponents. It is wholly unacceptable for the largest nationalist party to be subjected to this kind of electronic surveillance. This is not a breach of our security, it's a breach of our human and civil rights."

Adams said he had been alerted to the discovery of the device late on Monday night when he received a telephone call to go to Connolly House. Earlier that evening Adams had been engaged in several hours of intensive discussions with senior officials from the British and Irish governments.

"The use of such a highly sophisticated bug was a very serious act of bad faith by the British government," said Adams, "it highlights the continuing hypocrisy of a British system which uses its enormous resources to spy on its political opponents."

"It is also evidence of a continuing war mentality amongst the securocrats who run the NIO and whose only engagement with the peace process is to subvert and undermine it," he said. The question remained who authorised this and how many more of these devices exist, said Adams. The party had no idea how long the device had been in place in Connolly House.

Inside the small upstairs room where the device was uncovered, journalists and film crews from the international media crowded to take photographs. Adams warned journalists not to make light of the discovery.

"It's tempting to laugh this off but this is beyond a joke. This is very serious for us. Sinn Féin is doing its very best trying to make a deal with the British, the two governments and other parties and this kind of bad faith makes that work even harder," said Adams. He accused the British government of gross hypocrisy.

Across the Atlantic, in the 1970's bugging political opponents by a government was considered an international scandal. Thirty years ago US President Richard Nixon was forced to resign after he was implicated in the bugging of political opponents. In Ireland covert surveillance has been part of the counter insurgency armoury of British occupation. It has also a deadly dimension.

In 1994 high-powered surveillance equipment was found at the scene of a brutal sectarian killing. Pensioner Roseanne Mallon had been shot dead at the home of a relative just a few weeks earlier. Following the discovery it was revealed that a covert British army unit had been at the scene during the killing but had been ordered not to intervene.

A bugging device was also used in a shoot-to-kill stakeout in 1982. 17-year-old Michael Tighe was shot dead and a second man seriously injured by a covert RUC unit. The killing was later investigated by senior British police officer John Stalker. Stalker was removed from the inquiry after he requested a copy of the covert listening tape from MI5.