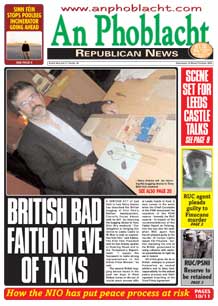 A serious act of bad faith is how Gerry Adams has described the British bugging of Sinn Féin's Belfast headquarters, Connolly House. Adams said he will be returning the bugging device to Tony Blair this weekend. "Our delegation is bringing this device to Leeds Castle to Mr Blair to seek an explanation from him," said Adams. The Sinn Féin President said he had already spoken to Downing Street and to the Taoiseach's Department. "I expect the Taoiseach to make strong representations to the British Prime Minister," he said.

The second British bugging device found in the past ten days in West Belfast comes on the eve of crucial peace process talks at Leeds Castle in Kent. It also comes in the week when the Chief Constable of the PSNI announced the retention of the PSNI reserve - formerly the RUC reserve - in breach of the recommendations of the Patten Report on Policing. And this was also the week when RUC agent Ken Barrett pleaded guilty to the murder of human rights lawyer Pat Finucane - further exposing the role of the British government in using collusion with unionist paramilitaries to fight its war in Ireland.

All of this gives the lie to British attempts to present themselves as neutral arbiters and to deny their responsibility for the stalled peace process and their repeated breaching of the Good Friday Agreement.