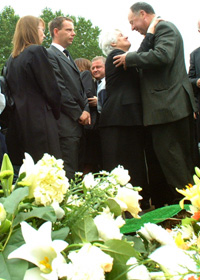 As the Republican Movement was being reorganised after the split in 1969, one of the first actions of the leadership was to entrust Joe Cahill with the task of mobilising Irish republicans in the United States. He travelled there in 1970 and initiated Irish Northern Aid, which played a pivotal role in solidarity with the republican struggle ever since. Joe maintained his close contact with Irish America, a link that was crucial in helping to ensure that the Irish diaspora was mobilised to great effect during the peace process.

Irish America paid tribute to Joe Cahill in New York on Wednesday, the day after he was laid to rest in Ireland. Within hours of the announcement of Joe's death, a grouping came together under the banner of the Friends of Joe Cahill in New York. Irish Northern Aid, Clan na Gael, Friends of Sinn Féin and the Ancient Order of Hibernians organised a memorial service in St. Francis Church on West 31st Street. The Mass was celebrated by Fr Brian Jordan.

"With others in this country Joe founded Irish Northern Aid and I know he would want me to pay tribute to them and to all the organisations and individuals who for the past 34 years have worked in solidarity with the Irish people in this the last phase of our long struggle for national self-determination."

He said Joe "epitomised the enduring bond of friendship and solidarity between the people of Ireland and our exiles of every generation". In conclusion Ó Caoláin said:

"Joe knew, as we know, that lasting peace is only possible and only tenable, on the basis of basis of justice, equality and freedom. And he kept his eyes on that prize throughout his life. Joe would want only one legacy and one memorial and that is our continued dedication and commitment to Irish freedom and our determination to achieve it."