You are history, you are legend 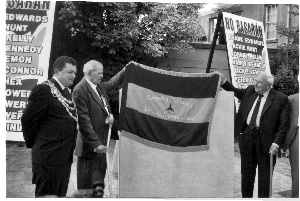 BY KEN KEABLE - These words echoed down the years and across the sea from Spain to Ireland on 9 July, when Waterford posthumously honoured and joyfully celebrated those who, in the 1930s, were officially reviled. Two surviving veterans of the International Brigade, who fought in 1936-38 to save Spain and Europe from fascism, unveiled a monument in The Mall, Waterford, to their eleven comrades from that city. About 400 people, including families of the Waterford brigadistas, city councillors and some of Ireland's leading trade unionists, gathered for the unveiling and the impassioned speeches, preceded by the Barrack Street Concert Band.

Before the ceremony there was a mayor's reception in City Hall. Relatives of Mossie Quinlan, Jackie Lemon, Frank Edwards and Peter O'Connor were present, but the organisers were unable to trace relatives of the Power brothers (Johnny, Paddy and Willie), Jackie Hunt or Johnny Kelly (all of whom are known to have died in England) or Harry Kennedy or John O'Shea. As Michael O'Riordan movingly told in his speech, some had to leave Ireland because the Catholic Church, and 'official Ireland', hounded them out of their jobs. Frank Edwards, a teacher, was told in writing that he would never work in a Catholic school in Ireland again. He taught at the Jewish school in Dublin until his retirement. The Catholic Church in Spain has officially apologised for supporting the fascist rebellion, but its counterpart in Ireland has yet to do so.

The monument, made of Spanish granite and created by international award-winning sculptor Michael Warren of Gorey, was erected by unanimous decision of Waterford City Council. It was unveiled by Michael O'Riordan (87) of Cork, former Chair of the Communist Party of Ireland and author of The Connolly Column (a history of the Irish international brigaders), and, from Britain, Jack Jones (91), President of the International Brigade Memorial Trust and former General Secretary of the Transport and General Workers' Union. Both men fought in the battle of Brunete in 1938 (The only other surviving Irish veteran, Bob Doyle, was unfortunately unable to make the journey from London).

Other speakers were: Moe Fishman (89) of New York, Secretary of the Veterans of the Abraham Lincoln Brigade, who spoke warmly of his memories of the Irish volunteers in Spain and brought thanks from a US peace organisation to the Irish people, for their opposition to the invasion of Iraq; The Mayor of Waterford, Cllr Seamus Ryan, a grand-nephew of Peter O'Connor; and Dolores Wilde, daughter of Sam Wilde, commander of the British Battalion of the International Brigade, who read from the speech made by her namesake Dolores Ibarurri to the departing international brigaders in 1938, telling them "You are history - you are legend".

Former RTE correspondent Liam Cahill, a cousin of Mossie Quinlan, who was killed in the battle of Jarama in 1937, speaking in Spanish, Irish and English, said "I hope that the monument will become a place of resort for all our citizens - young and old - and for our visitors to come and reflect on the perennial values of democracy, republicanism and socialism, and the continuing need to defend them."

The ceremony was chaired by Waterford playwright Jim Nolan. Eleven red roses were placed before the monument by young relatives of the Waterford men whose names were listed on the plaque. Frank Kelly (brother of the late Luke Kelly) led the singing of The Internationale, which became the anthem of the International Brigade, and piper Tom Casey, son-in-law of Peter O'Connor, played Amhrán na bhFiann.

Several speakers emphasised that the Spanish Civil War was an international war to defend the elected government of Spain against a fascist revolt that was aided by the armed forces of Hitler and Mussolini, at a time when Britain, France and the US were still appeasing Hitler. These governments shamefully denied the elected government of Spain the right to buy arms to defend itself. Moe Fishman said that the International Brigade and the Spanish people bought these governments two and a half years in which to change their minds about Hitler, and if they had done so, and had the fascists been defeated, the Second World War might have been averted. This is the historic significance of the war. This is why 40,000 anti-fascists from 53 countries rallied to the International Brigade, in what he called "World War One-and-a-half". They saw what was coming, and tried to stop it.

After the ceremony there was a social evening of traditional music and song in the Granville Hotel, compered by RTE South-East correspondent Damien Tiernan. Dubliners' singer Ronnie Drew sang Christy Moore's Viva la Quince Brigada, about the Irishmen who fought and died in Spain.

Most of the Waterford brigadistas were former IRA members who had joined the 1934 Republican Congress, which tried to make the Republican movement more political, to link it to the labour movement, to address social issues such as slum housing, and to fight the growing threat of fascism in Ireland and in Europe. Some took part in London's "Battle of Cable Street" in October 1936, when fascist Blackshirts were prevented from marching through the Jewish area of the East End.

• To help pay for the monument, a beautiful, and highly informative, commemorative booklet (by Manus and Annette O'Riordan) is available from the Book Centre, 25 Barronstrand Street, Waterford, for €10 (plus €2 p&p). It is appropriately titled, You are history, you are legend.