Terror at the turn of the road 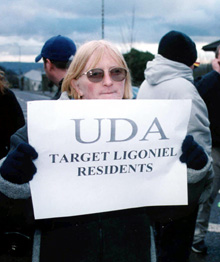 ad all notions of neighbourliness and common civic decency valued and practiced within the adjacent Protestant communities become suspended.

It's as if you've stepped through some kind of moral warp in space and time and although the universe looks the same, your whole relationship within it has been abruptly transformed.

At this point, schoolchildren can be attacked on their school buses, pensioners can be forced to walk through a hostile crowd, cars can be smashed up and drivers injured, electricity supplies can be vandalised and telephone wires cut while police stand idly by and see nothing and know nothing and do nothing.

Here the state and its agencies do not enforce the law or protect the vulnerable or punish criminals. You may have only travelled a few dozen yards but you're in a different world.

During recent disputes over the possible rerouting of a number of Orange parades, including that past Ardoyne, the Orange Order and their supporters specifically targeted the nationalist community of Ligoniel.

The residents of Ligoniel weren't involved in the decision, they had no say in the outcome, but they were vulnerable, and as such a prime target for unionist intimidation.

In the week before the Twelfth, Orange Order supporters, sometimes accompanied by known high profile loyalist gunmen, blockaded the roadway into Ligoniel for five consecutive days, including twice on Saturday 10 July.

In the two-week period before the Twelfth, vehicles travelling to Ligoniel were attacked 16 times by missile throwing unionist mobs. The attacks were consistently carried out outside the gates of Ligoniel Park close to the traffic lights at the 'Turn of the Road'.

Windscreens and passenger windows were smashed with barrages of bricks and bottles and stones, while exterior metalwork also suffered considerable damage.

The vehicle of one Ligoniel resident suffered three smashed windscreens and a buckled wing within the space of two weeks. "At £50 for each windscreen and a £65 repair bill for the wing, it all adds up," says the driver. But it's not just the cost, it's also the trauma.

One driver has already suffered hand and neck injuries. Another feared for his life when a unionist mob surrounded his car and tried to prise open the doors. But residents fear the potentially deadly consequence of drivers swerving to avoid a missile or driving through red lights to avoid the mob. "Sooner or later someone is going to get killed," the driver says.

Despite the fact that the attacks are consistently launched from the same position on the road, the PSNI have refused to intervene and protect the traffic. They even refuse to acknowledge that the damage to vehicles and their passengers is a result of a sectarian attack.

"The PSNI record it simply as a traffic accident; if the same person's car is attacked a number of times, they simply record it as a traffic accident with a pattern," says a resident. If the attacks were officially recorded as sectarian, the PSNI might be tasked to offer protection and even arrest the perpetrators and clearly that's something they don't wish to do.

For those nationalist residents travelling to Ligoniel as passengers on public transport, the ordeal is different but just as traumatic. The PSNI are not only refusing to offer protection to private vehicles, they are also refusing to ensure safe passage for public transport. At the sighting of a unionist mob at the traffic lights, bus drivers routinely refuse to drive their passengers into Ligoniel.

"Passengers are forced to leave the bus at the bottom of the street and walk through the hostile crowd preventing access to Ligoniel," says a resident. The vast majority of those using the bus service are women and children and the elderly. In other words, some of the most vulnerable sections of the community are forced to walk through a violent and abusive crowd.

On 7 July, residents travelling on the No 57 bus into Ligoniel were forced to disembark and walk through a unionist blockade. The PSNI who were present throughout the incident refused any assistance on the grounds that the blockade was a 'legitimate protest'.

During another incident, pensioners travelling on the bus were not only forced to disembark and walk through the hostile crowd, but were also taunted by members of the mob who held their noses and complained about the "stink".

Earlier in the year, a school bus returning children as young as eleven and twelve to Ligoniel was stopped and boarded by two unionists, both men in their 30s. Two children travelling on the bus were assaulted by the two men. The driver made no attempt to intervene.

A number of known unionist paramilitaries have also been seen during these "legitimate protests". Andre Shoukri of the UDA is currently out on license having been convicted of possessing a gun and ammunition. Shoukri's brother, Ihab, is on bail in relation to charges connected to the killing of loyalist Alan 'Bucky' McCullough. Part of his bail conditions included no contact with his brother.

During a unionist blockade of Ligoniel, Shoukri was seen less than 40 foot away from his brother, who was drinking in the nearby UDA bar. The PSNI made no attempt to enforce the bail conditions. When nationalist residents complained that the blockade was the work of the UDA, the PSNI denied there was any paramilitary involvement.

This is not the first summer that the nationalist community of Ligoniel has been subjected to unionist intimidation. In 1998, at the height of the Drumcree blockades, Ligoniel was besieged by Orange Order supporters for over a week. During this blockade, electricity supplies were cut and telephone wires were sabotaged.

"The community was almost completely cut off because at the time only one resident owned a mobile phone," recalls a resident. During the 1998 blockade the Orange mob threatened to burn nationalist residents out and firebomb the local Catholic church.

When residents gathered to protect a row of pensioners' houses, unionist paramilitaries opened fire, shooting two local people and injuring a third. One of those shot was only 16 years of age.

In July 2002 a 50-strong unionist mob attacked Catholic homes along the Ligoniel Road. During a 30 minute sustained attack, ten Catholic homes were targeted. Two brothers, Jonathon (23) and 24-year-old Michael Graham, fled their ground floor flat, clambering over fences to escape the machete and baton-wielding mob. Moments later, their home was engulfed by flames.

A second Catholic family narrowly escaped injury when a petrol bomb ignited but failed to smash a bedroom window. A third resident described lying against the front door in a desperate attempt to keep the unionist mob out.

"I lay on the floor in front of the door to protect the children," he said. Moments later, two shots were fired. "I don't know if they fired into the house. All I know is that these people wanted to kill a Catholic," he said.

Ligoniel residents recently compiled a dossier of sectarian attacks and intimidation experienced by this small community in the two week before the Twelfth this year. The dossier has been forwarded to the NIO.

"What we have is lawlessness at the turn of the road," said the residents' spokesperson. "The police turn a blind eye and they say they don't have the resources to protect people who are being attacked as they drive through. The thugs know our cars and they attack with bricks and bottles. The police do nothing. They won't even say it is sectarian.

"There are leaders of the UDA present in the background at the blockade. The UDA is running the show here, backed up by the PSNI, who look on and do nothing. We just want the attacks to end and to be allowed to get on with our lives in peace."

Local Sinn Féin councillor Eoin Ó Broin said that continuous complaints to the NIO about attacks and the blockade had been ignored, despite the presence of the UDA's 'brigadier', Andre Shoukri.

"We have complained to the NIO every day about the PSNI's handling of these attacks and the blockade but the NIO and PSNI appear determined to allow them to go ahead. Can you imagine what would happen if nationalists attempted to blockade a unionist area? It's unthinkable. It's time attacks on nationalist areas were considered unthinkable by unionists too."