My Uncle Joe - By Mairia Cahill 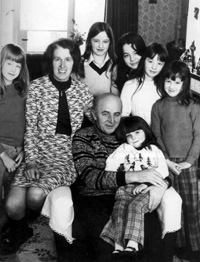 Joe and Annie with their six daughters

Lifelong republican, committed to struggle, IRA leader, supporter of the Peace Process, Honourary Vice President of Sinn Féin. I have heard Joe Cahill quoted as being all of the above, and he was, but most importantly to me, he was 'Uncle Joe', and I loved him. I found him to be witty, strong, yet gentle, grumpy yet hilarious, and he was loving. He was a role model as a republican to thousands, and he was a role model to me in terms of the way I want to live my life. We shared taste in music, in love for all things Irish, in commitment to empowerment for the working class, for community, for culture, and for Frances Black!

I loved going to concerts with Uncle Joe, as I was able to share in the joy expressed in his face when he heard a song that he loved, and I loved the twinkle in his eye when he would whisper a little comment to me which would literally have me in stitches. I loved listening to his stories, of which there were many, and he had a memory like no other.

He could remember back to 1942, when he and six others were arrested and sentenced to death, and he constantly talked about his close friend and comrade, Volunteer Tom Williams, who was hanged in Crumlin Road Jail. He always told me that he still talked to Tom, and firmly believed that Tom was watching over him. He would always pepper a conversation with little tidbits of memories of things that had happened throughout his life — some sad, some funny, some risky — and all fascinating. I could listen to Joe for hours on end.

Joe let me get away with murder — he challenged my thinking, listened to me, told me when I was wrong, comforted me when I knew I was wrong, slegged me, and taught and encouraged me. I remember about two years ago feeling highly embarrassed when I asked Joe if Only our rivers run free was a song about prohibition. Joe burst out laughing and tried to act serious when he told me I was an embarrassment, and to go and listen to the song again. When I explained that someone had told me that it was, he told me I was a 'bloody fool' for listening to them. For months afterwards, he would ask me about 'Only our rivers' and delight at my face rapidly turning dark purple.

I, like many others, thought that Joe would be there forever. I was used to him being there through my latter teenage years, to run to when I wasn't sure about something. I was also used to him regaling me with stories about my granda Frank, about his own mummy and daddy, and the history of my own family, republicanism aside.

Joe spoke frankly about being ill, and although I could see him getting weaker, I didn't believe that he was going to die. I had a conversation with him last week about things, keeping him up to date with all the gossip, etc, and he suddenly stopped me and told me that he would look after me. I told him I loved him and we both started crying. Joe wasn't afraid to cry and this in my view showed his strength.

He will be remembered by different people for different things, and I will remember him as 'Uncle Joe', the human being, the man who stayed strong throughout 84 years of his life, who showed dignity, courage and level-headedness. Most of all, I think, for me personally, he showed compassion, love and respect for his family — and he was the best guide in life that I could ever have.

I know he is looking down on Annie, Tom, Steph, Maria, Trish, Dee, Nuala and Aine and all of his family. I know he was extremely proud of his family and he loved them like any husband and father, brother, grandfather and uncle would.

Uncle Joe, I hope you are at peace, that you have been reunited with your friend and comrade Tom, with your family and other friends. We are winning Joe, and you made a lot of that possible.