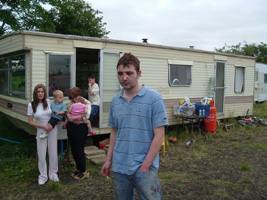 After years of sectarian intimidation by loyalists in Carrickfergus, three Catholic families were driven from their homes last weekend by a UVF-led mob that went on the rampage.

The 50-strong gang smashed their way into a house in the predominantly unionist Thomas Street of the County Antrim town at around 7pm on Saturday 24 July. The gang then savagely beat two Catholic men.

One of the Catholics targeted by the mob was 24-year-old Christopher Magill, who was beaten with legs broken off his kitchen table and had a television and video recorder smashed over his head.

Then, in an attempt to kill the young Catholic, the loyalists rammed him through the kitchen window. They gang tried to push his neck onto the broken glass in an effort to cut his throat.

A second man, a friend of Christopher Magill who wishes to remain anonymous, was repeatedly beaten with full cans of beer and received severe bruising on his back.

Magill was taken to the Mater hospital in Belfast by ambulance, where he received treatment for a broken nose and cheekbones and cuts to his head and face.

Magill's sister Lisa, who was in the house at the time, said the UVF were behind the sectarian rampage.

"It was because we are Catholics. End of story," she told An Phoblacht.

Lisa, who has lived in Carrickfergus for 28 years, said her mother's house in Windmill Avenue was the first to be attacked by the mob but, because of a security door at the entrance of her flat, they didn't get in. The gang then made its way to Thomas Street.

"I was in the house in Thomas Street when the UVF mob broke down the door and started running and wrecking everything in sight. I was lifted and flung around the hallway before they started to beat Christopher. I thought they had killed him."

Lisa then ran into the street, where she was met with more of the baying mob who started calling her a "Fenian whore" and "Fenian bastard".

"They kept shouting we were Provos and they were going to burn us and kill us. We were frightened for our lives."

After the ferocious attack, the gang walked calmly back to the Queen Vic public house in Victoria Street, a well known loyalist drinking den.

PSNI riot squads came on the scene but refused to intervene, against the mob, citing fear of a riot. Fearing for their lives, the families fled the area.

Lisa hit out at the attitude of the PSNI, who refused to go after the culprits and escorted the families out of Carrickfergus.

"I told the PSNI I would walk into the bar and point out the people responsible for the attack, but the PSNI told me I would cause a riot and they would not go into the bar. They then escorted us to the boundary of Carrickfergus and left us to fend for ourselves."

Lisa says her family are very grateful to Sinn Féin and other people who helped them. "God knows what would have happened to us if Sinn Féin had not got involved, because the Housing Executive didn't want to know," she said.

Meanwhile, Sinn Féin representatives Martin Meehan and Oliver McMullan hit out at media speculation that a Celtic poster in a child's bedroom may have provoked the attack. "These families have been on the receiving end of sectarianism for years and the media suggestion that this latest attack was a dispute about a poster is spurious," they said.

The Sinn Féin pair also expressed their outrage at the partisan attitude of the Housing Executive.

"During the loyalist feud, families involved were put up in five-star accommodation in the Hilton and Europa Hotels when they presented themselves as homeless. Compare this to what happens when Catholics are forced out of their homes by the UVF. The Housing Executive has left these families in caravans with no toilets or running water.

"And when they did offer them accommodation it was totally unacceptable and dangerous.

"This is outrageous and we will be contacting the Equality Commission about the Executive not adhering to their own obligations established under the terms of the Good Friday Agreement," said the Sinn Féin representatives.