Joe and Annie - Married in struggle 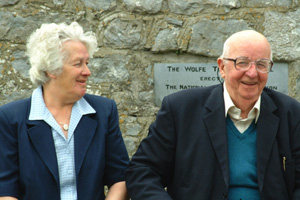 Annie and Joe at Bodenstown

Danny Morrison this week recalled his memories of good times with Joe and Annie Cahill. This is an extract of that article.

Years ago, I heard a very young Siobhan O'Hanlon talk about her Uncle Joe, clearly proud of her connection, through her mom, to the Cahill clan. I had first got to know Joe — let's say, professionally — to the extent that as far as I was concerned he was first and foremost an IRA man who could produce miracles, usually in respect to money.

It was only much later, after our introduction, that I entered his inner sanctum and realised that behind every great man there is a great woman, and that behind Joe was Annie Cahill. Joe was older than Annie but she was a thorough republican and through a wonderful relationship and marriage, through her dedication and her and her children's sacrifice, she facilitated his faithfulness to his comrades.

What power, what strength she provided!

When I turned 50, last year, Annie and Joe came along to my party in the Felons Club and gave me a card. When I opened it, a £50 note fell out, "a pound for every year", joked Joe, and I was touched, and humbled, because this couple had no wealth to show for the richness they had brought to our struggle, their decades of sacrifice, though for them their union had produced greatness, in devoted children whose love was all too evident in Joe's dying days.

I was with Jim Gibney in Donegal on Friday night when he got news of the death of Joe. I thought of a song on a 78 record that my Uncle Harry had given my mother some years after his release from prison, and I also thought of the death in 1988 of another great veteran, John Joe McGirl, who in his way had also made radical change possible.

The song was, Shall My Soul Pass Through Old Ireland‚ and is probably based on Terence McSweeney, who died on hunger strike in 1920, which had happened only 20 years, a flick of the fingers, before Joe became involved in the IRA.

Yes, for many of us, Joe Cahill became our 'Uncle', and in the late hours of Friday his soul certainly passed through old Ireland, leaving us a loss which is irreplaceable.