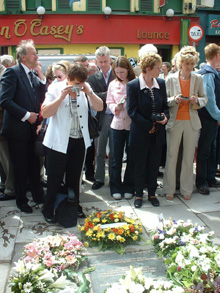 A permanent memorial to the three CIÉ workers killed in the Dublin bombings was unveiled last Thursday 22 July. George Bradshaw and Tommy Duffy were killed in December 1972 and Thomas Douglas in January 1973. All three died in Sackville Place, just off O'Connell Street. Organised by Justice for the Forgotten, the attendance at the ceremony included relatives of the deceased, CIÉ workers, the CIÉ Male Voice Choir, Dublin Mayor Michael Conaghan and other elected representatives. Seán Crowe TD and Councillor Christy Burke attended on behalf of Sinn Féin. Bernie McNally, Chairperson of Justice for the Forgotten, addressed the ceremony. We carry here an edited version of her address.

I would like to begin by saying a very sincere thank you, on behalf of Justice for the Forgotten, to both Dublin City Council and CIE who, together, have provided the funding for this beautiful memorial. I would also like to thank the many councillors who supported us in this endeavour. The families of the victims, the survivors and all the members of Justice for the Forgotten are deeply grateful that you have made this day possible.

It is also a source of joy to the Bradshaw, Duffy and Douglas families that Tom Duffy, the designer of this imaginative sculpture, is the son of victim Tommy Duffy. The families of the three men have travelled from Tipperary, Mayo, Scotland and England to be here today

The victims of these two bombings, even more so than those of the Dublin and Monaghan bombings, had gone unacknowledged down through the decades. I would also like to take this opportunity to remind you that there is a broad community of forgotten victims who were killed as a result of bombings in the State in the 1970s: the two teenagers, Geraldine O'Reilly and Patrick Stanley in Belturbet on 28 December 1972; John Hayes at Dublin Airport on 28 November 1975; Hugh Watters and Jack Rooney at Dundalk on 19 December 1975 and Patrick Mone at Castleblayney on 7 March 1976.

On the evening of 1 December 1972, the Amendment to the Offences Against the State Act was being debated in Dáil Éireann and a defeat for the Fianna Fáil Government appeared inevitable. Fine Gael and Labour were opposed to the amendment on civil liberties' grounds. Then, at 7.58pm, a bomb exploded near Liberty Hall, at 29 Eden Quay. There were no fatalities but many injuries.

Each bomb was estimated to contain 100lbs of explosives. Three minutes before the first bomb exploded, an anonymous telephone call was received by the Belfast Newsletter, giving warning of the two bombs. The caller said the two bombs would explode at 8.05pm and that they were planted at Liberty Hall and behind Clery's. The man in the Newsletter office who received the phone call told the RUC that the caller spoke with a "distinctly English accent."

The locations named were quite accurate but, obviously, the warning deliberately came too late and, in fact, actually caused the deaths of the two men. Because of the warning, the Gardaí evacuated the CIE canteen, which resulted in them walking straight into the bomb.

The explosions caused the main opposition party, Fine Gael, to reverse its decision on the Amendment and to abstain from opposing it. This resulted in the passing of the legislation through the Dáil in the early hours of the following morning. Because of the astute political timing of the bombings, suspicions immediately arose about the involvement of British agents in the attacks.

Then, seven weeks later, on 20 January 1973 a carbomb exploded again here in Sackville Place, but further down near Clery's, killing Thomas Douglas, aged 21. This bombing occurred on a Saturday afternoon at 3.15pm. The day would appear to have been selected because Ireland was playing in a rugby match against the All Blacks at Lansdowne Road, which would ensure a large contingent of supporters travelling from Northern Ireland. This would make it easier for one more Northern registered car to slip through unnoticed. The car used was hijacked in Agnes Street, Belfast, the very same street where one of the cars used in the Dublin & Monaghan bombings would be hijacked 16 months later. This was a copycat bombing of 1 December 1972 and it seems fair to assume that members of the same gang were involved in both.

On 11 August 1973, in an interview with Geoffrey Archer on ITN, the former Taoiseach, the late Jack Lynch, said he was suspicious that the Dublin bombings had been caused by British agents, especially as no organisation had claimed responsibility. We also know from papers released this year by the British Foreign and Commonwealth Office that, also in August 1973, the Minister for Foreign Affairs, Dr Garrett FitzGerald, had a meeting with the British Ambassador, Dr Galsworthy, at which he expressed concerns about the possible involvement of 'some disreputable characters in the employ of the British Government.' He was speaking in the context of the Littlejohn case.

The Barron report on the 1972/'73 bombings has been with the Government since late June and we await its publication with great interest. Also, like the victims of the 1974 Dublin and Monaghan bombings, the inquests into the deaths of these three men were never completed. However, as in that case, our lawyers have succeeded in having them reopened. They are due to reopen fully on 21 September, provided the Barron Report has been published.