Joe Cahill: A lifetime in struggle 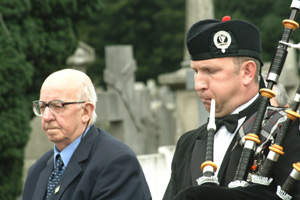 Joe Cahill at the funeral of Eamonn Mac Thomáis

How do you write about Joe Cahill? What words do justice to a man whose lifetime of struggle mapped the turbulent history of the island where he was born? He has already been described as an icon, a colossus of the struggle, a stalwart of republicanism and as a republican veteran, an epithet with which Joe himself was never completely comfortable.

These words might begin to capture the enormity of his contribution but they don't begin to describe the man. For a start, there was nothing pretentious or grandiose about Joe Cahill, even down to his trademark flat cap, wide glasses and granddad cardigans.

But more importantly, words like icon and veteran suggest someone who had already played his part and was now content to draw on that legacy. Even in his 80s, Joe Cahill did not belong to the past. His republicanism was as active and relevant as it was when he first joined the Fianna at the age of 17 in 1937.

Last year, with Joe's failing health already common knowledge amongst the Republican Movement, Dublin hosted a testimonial function in honour of Cahill. Having been diagnosed with asbestosis, a consequence of working a short time in Belfast's shipyards, Joe knew he was living on borrowed time but his thoughts were only of the future.

"I too have a dream," Joe told the audience. "In 2005 we will celebrate the 100th anniversary of Sinn Féin. We may not have our freedom by then but we will have paved the way. Hard work brings results," said Joe.

Hard work and vision were the twin strengths that shaped Joe Cahill's life.

Joe Cahill was born in Belfast on 19 May 1920, the eldest son of an independent compositor and printer, whose growing family lived above the tiny printing shop in Divis Street. In the first year of Joe's life, over 450 people were killed and more than 2,000 wounded in Belfast.

As Brendan Anderson in his biography pointed out, "the new Cahill baby came into the world to the sound of gunfire and explosions, sounds which would echo in his ears for most of his life". A few months earlier, the notorious Black and Tans had arrived from England to begin their brutal campaign of violent repression in Ireland.

Shortly after Joe's birth, Britain imposed partition with the Government of Ireland Act. Throughout his life, Joe often highlighted the fact that he had been born into a united Ireland, stressing his hope to die in a re-united Ireland. It was, sadly, a wish that was not fulfilled.

In the early 1900s, Joe's father had joined the Irish National Volunteers, later to become part of the James Connolly's Irish Citizen Army. After the Rising, Joseph Senior had applied to join the IRA but had been asked to stay at his post printing republican material.

Joe's mother Josephine was equally republican in her outlook but as is often the case, her role was to anchor down the family, managing the meagre income and instilling a sense of history and struggle into her growing brood.

During the Hungry Thirties, Joe had been only a schoolchild, but the poverty and sectarianism of the Six Counties at the time shaped his political development. Particularly important to Joe was the brief flowering of solidarity between the Protestant and Catholic poor during the outdoor relief riots of the early '30s.

Forced labour for a pittance was the only form of relief for the unemployed in the Six Counties. When the unionist government announced a cut in the rate of outdoor relief, Catholic and Protestant unemployed organised a strike, standing together during an increasingly violent confrontation with the state.

Joe may have only been a child but the memory of that moment of solidarity remained crucial to his political perspective throughout his life. During a speech made a few months before his death, Joe spoke passionately about the coming together of Orange and Green and unity between Catholic and Protestant.

In his late teens, Joe joined the IRA. He recalled it being very difficult to join the Republican Movement in those days, with a lengthy entrance process. The process involved study and exams and a realistic acknowledgement of the likely outcome of membership — death, imprisonment or exile.

After a brief period working in Newry, Cahill returned to Belfast to work with one of the IRA's more unusual units. Known as the Special Unit, the squad was made up of Protestant republicans, often working in deep cover and able to more easily evade detection from the sectarian-minded Special Branch of the RUC.

But it was the events of 1942 that seem to have marked out Joe Cahill's commitment as a lifelong republican. It also set in motion a series of events which would not be concluded for a further 55 years.

The Special Powers Act of the 1940s rendered all sign of opposition to the sectarian Six-County state illegal. This included commemorations of the Easter Rising. In 1942, it was decided to organise a parade in defiance of the ban. Joe Cahill and his commanding officer, Tom Williams, were at the centre of a plan to create diversions to draw the RUC away from the intended parade.

But the harmless diversion tactic escalated into an armed siege when an RUC patrol did not run away as anticipated but pursued the IRA unit. During the siege, Tom Williams was shot and seriously injured and the RUC man leading the assault was shot dead.

The unit was prepared to stand its ground but when the RUC deployed civilians, including a six-year-old girl, as human shields, the IRA Volunteers surrendered to avoid civilian casualties. The summary execution of the wounded Williams by a Special Branch officer was thwarted when Joe threw himself over his injured comrade and saved his life.

And the rest is history. Convicted and condemned to death, five of the six republicans received a last minute reprieve but the authorities, hungry for their pound of flesh, went on to hang Tom Williams. The prison authorities reneged on a promise to allow his comrades to visit Williams before his execution.

Joe often recalled his last glimpse of the man he loved like a brother walking down the corridor to his death. For the next 50-odd years, Cahill campaigned to have Tom's body released from its unmarked prison grave.

In 2000, Cahill's abiding wish was fulfilled as he joined thousands of republican mourners attending the re-interment of Tom Williams' remains in Milltown Cemetery. At the time, few thought that the next mass republican funeral would be that of Joe Cahill himself.

In October 1949, Joe Cahill and his four comrades were released from Crumlin Road jail. By that year the IRA's campaign had been almost eclipsed through imprisonment and internment, but immediately republican ex-prisoners started to reorganise. It wasn't very long before Cahill reported back.

In the 1950s, Joe combined his IRA duties with that of political organiser within Sinn Féin, working towards the party's aim of establishing a branch in every parish, urban and rural, in Ireland. By 1956, the IRA was engaged in another campaign and within a year, Joe was back in Crumlin Road Jail as an internee. Over four years later, Joe had the dubious honour of being the last internee to be released from the Crum.

In the early 1960s, Joe Cahill threw his energy and commitment into the National Graves Association, but if he felt sidelined by the young activists of the day it was short-lived. By the late 1960s the Civil Rights Movement was tapping into the grievances of sectarian discrimination experienced by northern nationalists and the rebirth of republicanism as a popular movement was already underway.

Joe Cahill was a physical-force republican but he always recognised the importance of political work. In the 1970s, Cahill's priorities stemmed from the necessity of defending the nationalist community from unionist mob attack, followed by the RUC and later the British Army.

It wasn't long before Joe Cahill added to his duties in Ireland the building of a solidarity movement within the USA. He was to play a key role in the establishment and success of Irish Northern Aid and other Irish American initiatives.

It was during the early days of internment in August 1971 that a small incident set in motion a series of events that ended with Joe back in jail two years later. Footage of Joe Cahill at a Belfast press conference was broadcast internationally when he was inadvertently introduced as the OC of Belfast. Amongst the thousands of people worldwide who watched that footage was a young Libyan republican, Muammar Ghaddafi.

In May 1973, Joe was jailed in the south for his part in the Claudia gunrunning operation. In the dock, Cahill announced that if he was guilty of any crime, "it is that I did not succeed in getting the contents of the Claudia into the hands of the freedom fighters of this country".

In Mountjoy Prison, Cahill and other republican prisoners went on hunger strike in a successful campaign to establish their political status. After 21 days, the prison authorities conceded to the prisoners' demands and recognised their 'special' status.

But in 1981, the struggle for political status in the North was to lead to far more tragic consequences, with British Government intransigence leading to the death on hunger strike of ten republican prisoners in the H-Blocks of Long Kesh. At the time of Bobby Sands' death, Joe was in the USA campaigning for support amongst Irish Americans.

It was, as Joe later recalled, a time of great sorrow, but with the electoral success of Bobby Sands and the other Hunger Strikers, republicans began to build a long-term political strategy alongside the military dynamic of their struggle.

For many people of Joe's age, the passage from physical force republicanism to the politics of the Peace Process may have seemed too difficult a step, but not for Joe Cahill. His passion for the struggle and for progressive change made no distinction between the two strategies and he played as honourable and decisive a role in the Peace Process as he did in the war.

Joe Cahill was never an old republican; he was simply a republican with 84 years of experience under his belt. He will be sadly missed.