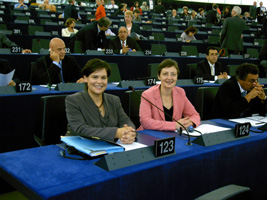 Monday 20 July 2004 marked another important milestone in the advancement of the republican struggle when Bairbre de Brún, representing the Six Counties, and Mary Lou McDonald, representing Dublin, walked into the European Parliament building in Strasbourg, France. Not only had the electorate endorsed two Sinn Féin MEPs, but also more importantly, they had endorsed an all-Ireland team of Sinn Féin MEPs. For the first time in Europe, the Irish people were represented North and South by the same party.

I was one of those accompanying the two MEPs on their first day of term and Monday was spent familiarising ourselves with the EU Parliament — a place which caters for 732 MEPs and their staff, not to mention masses of permanent workers. We thought it was going to be huge and impersonal, and so it proved. It is difficult to describe the enormity of the place — from the outside, its circular shape dominates the immediate skyline, much like a soccer stadium. Inside, the building is plush and modern — yet strangely oppressive. Its sheer size was intimidating and we spent the first couple of days treading a linear route, so as not to get lost down a labyrinth of corridors. To make matters worse, many elevators and escalators only went to certain floors. I can only imagine how inaccessible the place is for people with physical disabilities.

Having found our bearings, we met with the other members of the European United Left/Nordic Green Left (GUE/NGL) group. They quickly made us feel very welcome and were able to help with all of our queries and concerns. Without such help, it could have been very easy to become lost in the bureaucracy of the place.

Tuesday was the inaugural session of the EU Parliament and both MEPs were the centre of the Irish media's attentions. Much of the day was spent doing media interviews about how the MEPs felt being in Strasbourg, what they hoped to achieve and in what ways Sinn Féin could use the European Parliament to advance the Peace Process.

The line of questioning was far removed from much of the very negative media Sinn Féin had received in the run up to the elections. I suppose the journos felt they had to be magnanimous on their first day, and that there is plenty of time to stick the boot in over the next five years. Either way, both MEPs were very clear and articulate and set out Sinn Féin's priorities and agenda for change within the EU.

By the afternoon, Mary Lou and Bairbre had taken their places in the EU Parliament chamber for the vote to elect the new President of the EU Parliament. They voted for the GUE/NGL group leader, Francis Wurtz, and although he was not elected, there is no doubt he will continue to play a leading role in the Parliament. Josep Borrell, the nominee from the much larger Socialist grouping, was elected on the first count and our MEPs wished him success in his new role.

In the evening, the Sinn Féin MEPs held a private meeting with a delegation from the Irish Farmers' Association, led by President John Dillon, and impressed upon them their commitment to the agricultural sector in Ireland and the need to revitalise rural communities and Irish agriculture on an all-Ireland basis. We also met with Dóchas, an NGO campaigning for global justice. This outreach work will be a key priority for our MEPs.

Wednesday 22 July would turn out to be another historic day for Sinn Féin. Both MEPs addressed the EU Parliament on the debate surrounding the Irish Presidency. Mary Lou McDonald spoke first and said: "As Irish republicans, following in the tradition of Bobby Sands MP, we are committed to the politics of equality, justice and freedom. We bring Sinn Féin's agenda for change, for Irish unity and independence to this forum." She also set out the party's opposition to attempts to turn the EU into a superstate or a military and economic superpower and called for support for EU reform.

In her address, Bairbre de Brún said: "I look forward to building support for the Irish Peace Process and Irish unity and independence. It makes sense for all of Ireland to be treated as one whether in employment, agriculture or human rights and equality." She also highlighted the scandal of an Orange parade being forced through Ardoyne.

Both MEPs opened their speeches 'as Gaeilge', a timely reminder that Irish is still not a fully recognised official and working language of the EU.

On Thursday, the MEPs were present for the vote for EU Commission President. Jose Durao Barroso was the sole candidate for the post and was duly elected with 413 for and 251 votes against. Barroso's vision and priorities are far removed from those of Sinn Féin and therefore our MEPs did not support his nomination as EU Commission President.

And so it turned out to be a productive and successful week for Sinn Féin in the European Parliament. The significance and symbolism of an all-Ireland team of Sinn Féin MEPs was certainly not lost on the other Irish MEPs in the EU Parliament.

When the initial media interest around the EU wanes, the Sinn Féin MEPs have a considerable job of work ahead of them. Their task is about bringing the power back to the people, engaging in outreach work within their communities, changing the political priorities of the European Union, working to secure the Peace Process and building for Irish unity.

This is why republicans will never become blasé about electoral successes, nor become lost to the institution.