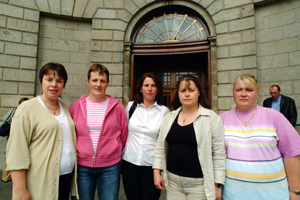 The Dáil rises for its summer recess this week but for patients on trolleys in Accident and Emergency units there was no summer break on offer, as neither the Taoiseach nor the Minister for Health and Children could offer any measure to address the growing crisis in our hospitals.

Last week, Dublin Sinn Féin Councillor Dessie Ellis was contacted by the distressed family of a stroke victim who was on a trolley in the Mater Hospital A&E unit for three days. The man finally got a bed but there were 29 people on trolleys in the unit when he was transferred. A few days later it was revealed that a new cancer unit in St James's Hospital in Dublin has been empty and under lock and key for months. This was provided at massive cost and could cater for 20,000 patients per year. The unit is one of the health facilities built at a cost of €400 million throughout the 26 Counties but lying idle because the government will not provide the extra funding needed — either through additions to budgets or better management — that will allow them to be opened and operated.

On Wednesday, lawyers for four women from County Monaghan completed stating their case to the High Court for the restoration of Maternity Services to Monaghan General Hospital. They are Sharon O'Neill, sister of Denise Livingstone, whose baby died in an ambulance after she was turned away from the hospital following the closure of the unit, Sinn Féin Councillor Brenda McAnespie, Shauna Tierney and Maura Sherlock. In court for the hearing on Wednesday was Sinn Féin Health spokesperson Caoimhghín Ó Caoláin. He had just come from the Dáil, where he had challenged the Taoiseach to state what immediate measures he is going to take this summer to address the crisis in the health services.

Ó Caoláin asked the Taoiseach: what "immediate and effective measures he will take during the summer months to address the crisis in the health service". Pointing to the crisis in nursing, he said:

"He must accept the facts. The Irish Nurses' Organisation has highlighted the drastic shortage in the number of nurses. There are some 700 vacancies and it is projected that this will increase to in excess of 2,000 within the next 18 months.

"A report into the death of a nine-year-old child, Frances Sheridan of Cootehill, Cavan, was published recently. The girl in question was sent home from the accident and emergency department of Cavan General Hospital and the report to which I refer illustrates a litany of errors and system failures which must raise questions about the overall management of our hospital delivery systems.

"The report must invite a challenge to the ever-increasing control over the configuration of hospital services delivery by consultant interests. Will the Taoiseach cease providing a litany of statistics and information about financial expenditure and refer to service delivery? Will the Taoiseach respond in clear terms?"

The Taoiseach replied with his usual list of extra spending and then said:

"I do not believe that the extra 30,000 staff or the additional billions of euro provided are not being used properly."

"We all recognise and acknowledge that there is more money being spent on the health services today than at any time in the past. What is the Taoiseach going to do to address the specific areas in respect of which urgent action is required? We cannot allow the current position to obtain... Will the Taoiseach provide the Minister with the necessary funding?"

But the Taoiseach had not one practical measure to offer. He and his ministers will breathe a sigh of relief as they go on their summer holidays. But they are sowing seeds of anger and political discontent for which they will pay dearly in the months ahead.