The lesson of Drumcree 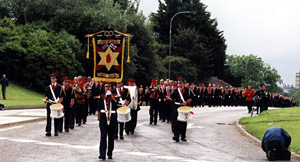 If there's one lesson to be drawn from this year's Orange marching season and more particularly Drumcree, it is this. Exclusivity and the refusal to engage has led the Orange Order and the people they claim to represent into a political and cultural cul de sac. The bullyboys who were allowed full reign at Drumcree not only failed to defeat nationalist aspirations of equality and respect, they also drove many of their own supporters to question their own position.

At the height of the Drumcree standoff, the Orange Order could attract 30,000 supporters to the Hill and bring the Six Counties to a standstill with roadblocks, but sectarian intimidation as a mass political tactic was always doomed. Growing political strength and confidence within the nationalist community was never going to allow a return to the old days of Orange supremacism.

The Orange Order had a well-remembered and documented history of virulent anti-Catholic sectarianism. Its marches through nationalist communities were always accompanied with intimidation and sometimes led to the occasional pogrom in which Catholic homes and property were attacked, communities were put under mob siege and people lost their lives.

The Orange marching season and the sectarian intimidation of Catholics, as residents, as workers and as parishioners, has always gone hand in hand. Indeed, it is woven into the very fabric of the social and political life of the Six Counties.

In the past, companies employing a predominantly Protestant workforce routinely laid off Catholic workers during the summer. During July and August, civic venues became off limits for Catholics. The Housing Executive routinely freed up emergency accommodation in preparation for the annual flux of Catholic families forced to flee their homes.

The people of places like Garvaghy and Lower Ormeau Road called for dialogue and the re-routing of contentious Orange parades away from Catholic residential areas. Orangemen were only asked to speak to their Catholic neighbours and to march only where they could be comfortably accommodated.

The Orange Order responded like a spoilt child denied that extra lolly. Orangemen held over 3,000 uncontested parades every year but the idea of re-routing a handful in the interests of community relations drove the Order into a furious rage.

Like Richmal Crompton's Violet Elizabeth, they tossed their curls and stamped their foot and threatened to "scream and scream until they're sick". Well, they have screamed and screamed and all it has done is make them sick.

This year, less than 500 Orangemen marched to Drumcree in the wake of a bitter dispute between the local Portadown lodge and the ruling body of Grand Masters. Ironically, the split occurred because Portadown Orangemen had attended an informal meeting arranged by the Parades Commission in South Africa. The Grand Masters deemed such a move broke the Order's self-imposed taboo of engaging with the Commission.

But it didn't have to be this way and it doesn't have to be this way. Republicans and nationalists have no particular love for the Orange Order, how could they, given its history? For most nationalists, the Orange Order appears to be nothing more than a sectarian version of the Ku Klux Klan. But it even occurs to us that Orangemen could choose to play to their strengths rather than their weaknesses. Strengths like civic pride and moral duty. Teach us what can be valued.

There can no be longer a place for intolerance and sectarianism and exclusion. The Orange Order needs to acknowledge and reject those elements of its past culture that sanctions and encourages such traits and build a peaceful settlement with its Catholic neighbours and fellow citizens. Dialogue, respect and accommodation are the real challenges facing the Orange Order. There is no alternative, as the dwindling numbers attending Drumcree clearly illustrate.

Speaking from an upstairs window of the Orange Hall, deputy master David Burrows spoke briefly to the 500 Orangemen gathered below. It was the usual brief. The Portadown district was still here and Orangemen would march as they had done so for the last 200 years.

Shortly after 10am, the Orange marchers, accompanied by an accordion band, made their way towards Drumcree Church. The Parades Commission had refused to review their determination to re-route the parade away from the nationalist Garvaghy Road. At the front, an Orangeman carried a bannerette declaring, "Portadown Lodge No.1 is still at Drumcree".

On the Garvaghy Road all was quiet. The residents' spokesperson, Breandán Mac Cionnaith, had asked nationalists to stay away and they did. Outside St John's Catholic Church, in the past the scene of some appaling sectarian antics by the marchers, there was some additional security but generally it was low key.

At Drumcree church the marchers attended a Battle of the Somme commemorative service before lining up to parade to the barrier blocking their way down the Garvaghy Road on Drumcree Bridge. At the bridge, a simple pole had replaced the 20-foot steel barricade of former years and the hundreds of riot-clad RUC/PSNI officers were replaced by a handful dressed casually in boiler suits.

At the barricade, the familiar ritual of handing a letter of protest was re-enacted. The protestors remained for less than 15 minutes as the band played 'Onward Christian Soldiers' before dispersing around 2pm.

At the barrier, local Orange Order leader David Burrows reiterated the Orangemen's tactic of returning to the bridge every Sunday until they are allowed to march down the Garvaghy Road. The march has been re-routed since 1998, over 300 Sundays ago. Every Sunday, a handful of Orangemen march to the bridge.

Concluding the protest, Burrows read the familiar quote: "Here we stand. We can do no other." But no one really believes it any more. Engagement with local residents is becoming increasingly inevitable and in truth, Orangemen know there is nothing to fear from such an engagement.

As the Drumcree marchers prepared to disperse, the skies darkened. In the fading light, a lone Orangeman stood in the field silhouetted against the approach storm and the spire of Drumcree Church.

The Garvaghy Road Residents Coalition has said that the media comments by officers of Portadown LOL District No. 1 suggesting that the Orange Order would not rule out future talks with residents if the Drumcree parade was allowed to take place do not represent any shift in the Order's position.

A spokesperson for the GRRC said: "In June last year, proposals to the effect were sent by the Orange Order to the British Prime Minister's chief of staff Jonathon Powell. They were later sent to the GRRC two weeks after Drumcree. This year, the same proposals were tabled again by the LOL. The Parades Commission was aware of the proposals both last year and this, when they issued their determination barring the Orange Order from parading along Garvaghy Road. Clearly, they also saw nothing new in the Orange Order's proposals.

"Furthermore, the commission has gone on record to state in its most recent determination that the GRRC is the only group prepared to enter into any engagement without pre conditions. Despite recent media spin, it remains a fact that the Orange Order has yet to publicly declare that it would be prepared to do likewise."