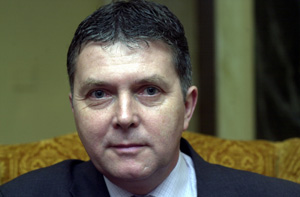 The oxygen of RTÉ commentary

Sunday night's frustrating Euro 2004 final in Lisbon between Portugal and Greece had all the excitement of a Scrabble night with George Bush until a one-man pitch invasion woke us all from George's dreary commentary.

The star-studded Portuguese forward line could have done with some of the sparkle shown in the jinking run of a fan who darted across the park before desperately throwing himself into the Portugal goal net. Unable then to out-run even the portly Portuguese stewards, the miscreant was unceremoniously crushed by the bouncers, prompting The Man from RTÉ to turn into an Irish Norman Tebbitt, exclaiming in dark tones: "I hope they give him what for."

No doubt regretting that he had no riding crop handy with which to help give the upstart a good thrashing, George then turned on the Portuguese TV bosses.

Startled by something interesting happening, producers showed the pitch invader's breath-taking run not just once but several times, and from all the available angles.

George must have sent Ray Houghton out to find his blunderbuss as he lashed into why Portuguese TV focused on the miscreant for several minutes, chastising his hosts for giving the trespasser "what Margaret Thatcher called the oxygen of publicity".

THE PSNI has suspended the requirement for Peelers to disclose their membership of secret societies in the face of threatened legal action by what Sinn Féin's Gerry Kelly called a "rump" within the force.

But if there's nothing sinister in a police officer swearing oaths of fidelity to these bodies, then why are they secret in the first place? And why are Peelers so keen to keep their membership secret if it's all harmless and above board?

THE Royal Irish Regiment, including the rump of the hated and disbanded Ulster Defence Regiment, is to be given the freedom of North Down by local councillors "in recognition of their actions both at home and abroad"!

The award (voted unanimously by overwhelmingly unionist North Down Borough Council) will be conferred on the regiment in a gala ceremony at the end of September.

The last time the freedom of North Down was granted to an organisation was in 1990 — when it was granted to the Ulster Defence Regiment in its original sectarian colours.

The long arms of the UDR

PROPOSING the RIR/UDR motion to North Down Borough Council, Councillor Austin Lennon said it was a fitting tribute to the troops "who have protected the people of North Down for centuries".

"The Royal Irish Regiment was of course only formed in 1992, but it was made up of other regiments, like the Inniskilling Fusiliers, who have served in Ireland, protecting us for over 400 years. They were also formed from the Ulster Defence Regiment, so the collective military honours now represented by the RIR are as long as your arm."

And the criminal convictions of the UDR, "now represented by the RIR", give the RIR a collective criminal record as long as all the councillors' arms in North Down.

GOOD WORK by the Special Branch at Heathrow Airport who plucked a pair of bearded, dark-skinned males from among the 65 passengers checking in for a flight to Boston.

Top marks for also nabbing one of the two yet again when he was about to board a flight from Heathrow for Saudi Arabia.

Tough luck, on both occasions, for Nazir Ahmed, a Muslim businessman from Yorkshire... who is better known to Westminster police as Lord Ahmed, a British Labour Party peer in the House of Lords and a pal of Tony Blair's.

A long way from Tipperary

FIANNA FÁIL FIGUREHEAD and former Dublin Foreign Affairs Minister Michael O'Kennedy is to bend the knee today (Thursday) before the British queen to have handed to him a trinket from the imperial jewellery box.

In recognition of his work in co-chairing the British-Irish Parliamentary Body, Michael O'Kennedy is to be made a Companion of the Most Distinguished Order of St Michael and St George, better known by the initials CMG, which republicans and lesser mortals deride as being short for "Call Me God".

Britain's Foreign and Commonwealth Office recommended to the British queen that she do the honour. The one-time republican from Tipperary accepted it. Not really what 'Soldiers of Destiny' are about, is it?

THE barmy UK Independence Party (UKIP) is wooing DUP Euro MP to join them in forming a xenophobic bloc.

The nutty but dangerous UKIP attracted most of the neo-Nazi British National Party's racist vote by rolling out ageing TV and film stars for its campaign, masterminded by showbiz PR supremo Max Clifford.

The Arab-baiting, sacked BBC chat show host, Robert Kilroy-Silk, became one of UKIP's new MEPs, while Hollywood sex star Joan Collins agreed to be party president but refused to answer any political questions. The mega-wealthy Joan loves Britain so much that she prefers to live as a tax exile!

Living in the ghetto

Residents in the Whitehall Square apartment block, who have been intimidated by a 300-strong, anti-Catholic loyalist mob and have objected to a huge loyalist Ulster flag being erected on their building, have been told by Ruthless: "If they don't like the flags of this country then they should go and live across the Border."

Ruthless did object to a smaller UDA flag alongside the Ulster flag on Whitehall Square because she thinks UDA/UVF banners "ghettoise" the area — and then told residents that they should be aware they are living in a "Protestant area"!

US SECRETARY OF STATE Colin Powell donned a construction worker's hard hat and builder's gear to lead US diplomats in a version of the Village People's 1970s hit, YMCA, at the closing ceremony of the ASEAN pro-Western security summit in Indonesia.

Apparently, tradition dictates that participants sing and dance in front of their peers. Would the sing-along security supremos have given such a warm welcome to the original Village People performing YMCA as not just an international pop hit but also a gay anthem?

And if Powell played the construction roughneck role, then who donned the leathers as the moustachioed, bare-chested, S&M butch biker guy?

Hope it wasn't Donald Rumsfeld. Could you picture it?

SADDAM HUSSEIN isn't worried about facing the death penalty. He wants David Beckham to take it.