The future is talking 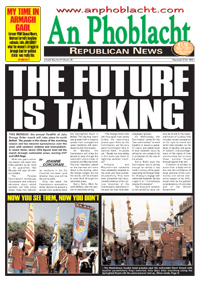 This Monday, the annual Twelfth of July Orange Order march will take place in north Belfast. The parade is the climax of the marching season and has become synonymous over the years with sectarian violence and triumphalism. In recent times, senior UDA figures have led the march through nationalist areas, waving UVF and UDA flags.

While this year's marching season has been relatively peaceful so far, there is no guarantee that Monday will pass off without incident.

The Parades Commission's increasingly inconsistent and arbitrary decisions about which parades can take place where, mean that nationalist residents in the Six Counties are never sure whether their area will be the one to suffer.

Only last week, the Commission reversed an earlier decision to prevent a parade from walking down the Springfield Road. The resulting march was greeted with a massive protest from outraged and upset residents, left abandoned by the Commission.

"The Orange Order time and time again have clearly broken the restrictions placed upon them by the Commission, yet the very same Commission fails to sanction them," he points out. "People are now asking is this body just there to legitimise sectarian marches?"

Ardoyne and Mountainview residents have repeatedly objected to the route and have protested peacefully. They have even presented well-documented evidence of the various breaches of the Commission's restrictions in the past, but they have been completely ignored.

On Wednesday, the Commission called for the "two communities" to work together to ensure a peaceful march, and added insult to local residents' injury by calling for any protest to be in proportion to the size of the parade.

Gerry Kelly says the Commission has to be big enough to realise it has made a wrong call by again rewarding the Orange Order for refusing to engage with nationalist residents. He has urged it to "immediately reverse this decision".

The long-term solution to the parading issue can only be found in the implementation of a policy that includes broad acceptance of the right to march but which also includes, on the basis of equality and parity of esteem, acknowledgement of the rights of host communities not to have these parades forced through against their will.

A solution is unlikely to come from a body which has lost the confidence of large sections of the community and whose decisions appear to be influenced more by the political considerations of unionists and of the British Government.