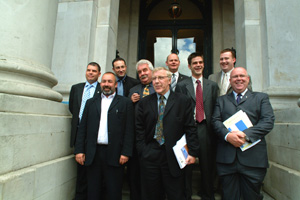 After the exhilaration, the headlines, the amazing first count victories of Sinn Féin topping many polls across constituencies of the 26 Counties, inaugural AGMs of city councils brought a hard dose of reality. The squalid undemocratic power grubbing that characterises local authority politics resumed, as if there had been no election at all.

The business in hand at these inaugural meetings was to elect a chairperson who doubles in the lucrative position of Mayor, and a deputy to go with him. And 'him' of course it was in the cities of Dublin, Limerick, Waterford, Sligo, Kilkenny and Drogheda, which all elected their mayors earlier this week.

And without exception, parties gathered together to ensure that Sinn Féin, and the people who had voted for them, were excluded.

The Labour Party, with 15 seats, joined up with Fine Gael (ten), the one Green councillor and, amazingly, the single PD councillor, to form a pact of just 27 votes to secure a majority in support of two Labour councillors who then secured election as mayor and deputy mayor.

Councillor Michael Conaghan, who came second to Sinn Féin in the Ballyfermot poll, was elected mayor. Councillor Andrew Montague, from Ballymun, who was far outpolled by Sinn Féin's Ray Corcoran, is deputy mayor.

The voting pact ensured the defeat of Sinn Féin's nominations of Larry O'Toole, for mayor and Tony Smithers for Deputy Mayor. Fianna Fáil, with their 12 seats on the council, abstained, as did the other independents.

The mayor then made his thank you speech where he spoke of the 'democratic alliance' that the parties in the pact which elected him had cobbled together. Well, nearly. The 'Charter' wasn't quite ready yet. None of them were quite sure whether it was the 'Democratic Alliance', the 'Civic Alliance', or ironically, 'the Alliance for Change'.

As Independent Councillor Mick Rafferty pointed out, he was appalled to see that this 'Alliance', was supported by a party, namely the PDs, "which thinks that inequality is a good thing". Where does adherence to the pact leave the Labour party? The next business showed very clearly.

The real business began along well worn paths. The city manager had earlier declared that the meeting's business would not include resolutions. Nevertheless, two resolutions urgently needed to be taken — one from Sinn Féin on the impending closure of Carmichael House, and the other calling to allow posters advertising the anti-Bush demonstrations to be allowed despite their breach of the bye laws recently imposed by the City Manager banning all postering advertising city events.

Carmichael House is home to 45 voluntary community organisations and provides support to over 350 our non-governmental organisations. The government has failed to provide the core funding required to enable the centre to keep open.

The pact, of course, immediately broke under the strain of a vote to suspend standing orders to take these emergency resolutions, and no two thirds majority could be secured, although the only party determined to stop the resolutions being debated was Fianna Fáil, with its 12 seats. After a lot of quite unregulated shouting and insult bandying, neither resolution was taken.

Carmichael House, for all the councillors in the pact care, can get closed down, and the community organisations based there, which so badly need support, can go to the dogs.

And then off went the councillors and their families and friends to the Lord Mayor's tea party reception in the Mansion House.