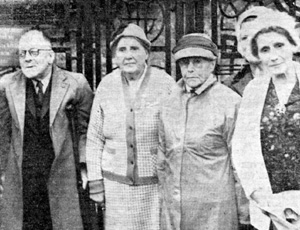 • This old photograph was taken at Bodenstown on June 23 1963 and includes from left: Joe Clarke, veteran of the Battle of Mount Street 1916; Mrs Russell, Cumann na mBan 1916 and a Republican Justice during the Tan War and imprisoned in 1922; Julia Grennan, member of GPO garrison 1916; May Daly, sister of Charlie Daly executed by Free State Forces in Drumboe in 1923; and Mrs O'Hanlon, mother of Fearghal Ó hAnnluain, killed in action with Sean Sabhat in Brookeborough in 1957