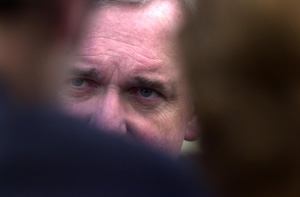 The clichés and superlatives were in full flow last weekend as the leaders of the 25 member states agreed a new draft of the EU constitution.

Bertie Ahern paid tribute to those who helped, saying "a ship that has been docked safely today", while Romano Prodi proclaimed that the new constitution was "democracy in its purest sense".

Given that only ten of the 25 states have proposed holding a referendum on the constitution, one wonders just where Romano Prodi found the pure democracy in a treaty that has yet to have any democratic tests applied to it. That being said, the Finnish parliament is debating proposals that would ratify the constitution this week.

First out of the blocks with a possible referendum date is the Dutch Government. The EU presidency moves to the Netherlands for the second half of 2004 and the Dutch are proposing a November referendum date.

Also on the referendum trail are France, Britain, Denmark, the Netherlands, Belgium, Luxembourg, the Czech Republic, Spain, Portugal and the 26 Counties.

There are 400 articles in the treaty and last weekend the final details on a new form of qualified majority voting, the composition of the EU Commission, the size of the EU parliament and on economic governance, were agreed in a 30-page document.

The new proposals on qualified majority voting mean that it now involves getting either the support of 55% of member states, with at least 15 states involved that make up 65% of the EU population. There is also provision for the recognition of objections where those opposed make up 30% of the EU states. However, it is all very far away from the idea of consent and unanimous decision taking that underpinned the European ideal when the Treaty of Rome was signed in 1957.

There is provision for some unanimous decision taking in the draft constitution. It comes in the details of the new agreement on cutting EU commission numbers in proposals that would ultimately leave some member states with no commissioner.

The new commission will have a member from each EU state, as well as a president and foreign affairs minister. This will run for five years and then the commission numbers will be equal to two thirds of EU member states, unless the EU Council agrees unanimously to increase or decrease the number of commissioners.

The EU parliament will have 750 members, with no one state having more than 96 members. Germany will be affected by this provision, as it now elects 99 MEPs to the parliament. There will be a minimum of six MEPs for smaller states.

On economic issues, the member states recommitted themselves to the flawed principles of the Stability and Growth Pact and the Lisbon Agenda. On the whole, though, these provisions are a fudge as they talk of "looking forward to possible proposals" which would strengthen and clarify the implementation of the pact.

There is also in the new agreement some refining of the original proposals on enhanced cooperation. These provisions allow some member states move on beyond existing common foreign and security policy agreements in the treaty and EU council authorisation for it has to be unanimous.

Perhaps most interesting in the new agreement and not reported widely in the Irish media are the provisions to reduce the disparity between the wealthy and poor EU regions. The new provisions include references to rural areas, areas affected by industrial transition, cross border areas and areas with low population densities.

Also amended were the provisions allowing the German government provide state aid to overcome the negative effects of partition between east and west. The Irish, though holding the presidency, missed the opportunity to include Ireland in this article, which has now been amended to allow for its repeal in five years, so the government will have completely missed the boat by then.

British objections rather than Irish diplomacy won the day on preserving national vetoes over tax law.

The summit's actual content was drowned in praise for the Irish presidency and relief that a deal had been reached on the constitution, even though the member states could not agree a new EU Commission president. That battle, like many others, has been put off to another day.